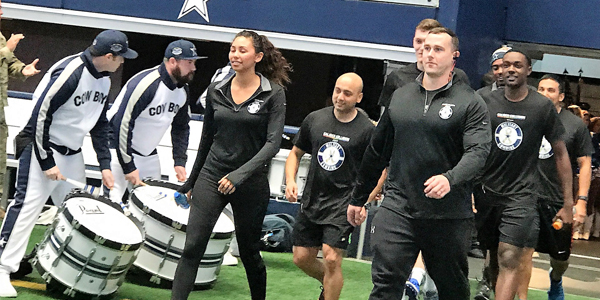 The event was organized to honor the nation’s military heroes by showcasing the soldiers’ athletic prowess.

Caliber Collision announced that it hosted a Military Combine with the Dallas Cowboys in which over 50 elite soldiers from Ft. Hood, Texas, competed for bragging rights as the toughest and fastest military members around. The event at AT&T Stadium was organized to honor the nation’s military heroes by showcasing the soldiers’ athletic prowess.

The soldier athletes competed in the same drills as those in the NFL Combine. Top male finisher SPC Tavon Johnson and top female winner SFC Shonta Tucker will both have the opportunity to announce the Dallas Cowboys’ first draft pick in April.

“This Military Combine allowed me to show the skills I learned as a soldier,” said Tucker, 41, and mother of five. “We are trained to be the strongest, standing ready to go to the enemy lines at any time to fight for our country. I am proud to represent my unit, serve in a leadership role and show a commitment to work hard, push ourselves to excel in anything we do, whether physical fitness and in our work.”

A highlight of the combine was the unveiling and presentation of three cars to Ft. Hood soldiers in need of reliable transportation. The three vehicles were donated by State Farm and repaired by Caliber teammates at shops in Dallas and Killeen, Texas, as part of the National Auto Body Council’s Recycled Rides program.

“These soldiers competing in the Military Combine exemplify the high caliber of individuals who have made the commitment to serve our country,” said Steve Grimshaw, president and CEO of Caliber Collision. “Our goal with the Military Combine is to salute and celebrate all the men and women who represent our country and give so much to protect our freedoms.”

Access to the Military Combine at AT&T Stadium was free to the public who came out to support the soldier athletes, enjoy meeting current and former Dallas Cowboys Sean Lee, Charles Haley and Darren Woodson, and watch entertainment by the Dallas Cowboys Cheerleaders, the Dallas Cowboys Rhythm & Blue Dancers, Drumline and Rowdy.

Advertisement
In this article:Caliber Collision