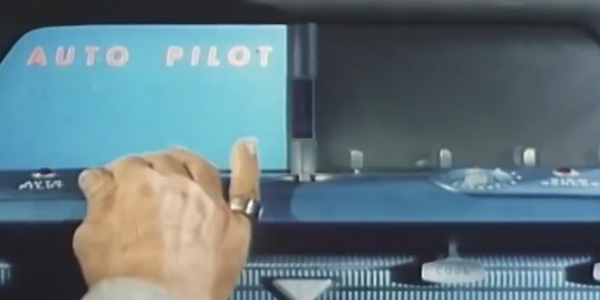 For the 1956 Motorama, GM produced a short film called “Key to the Future,” in which a family travels through time to the distant future of 1976.

During the 1950s, General Motors showcased its vehicles in an annual tour called “Motorama.” For the 1956 Motorama, GM produced a short film called “Key to the Future,” in which a family travels through time to the distant future of 1976.

They start out in a convertible. But once they hit 1976, they’re cruising down the highway in a vehicle that looks like the Batmobile.

“We’re all set for auto control,” the driver says, and then steers the car to an electronic control strip in the center lane. “Ah this is the life. Safe, cool, comfortable. Mind if I smoke a cigar?”

With the car doing all the driving, the family kicks back with orange juice and ice cream, served from the glovebox. As with any good film from the 1950s, the actors then break into song – the traffic-control guy too. (As it turns out, he has a lovely voice.)

While we seem to be moving closer to this fanciful vision of the future, GM has yet to deliver on the promise of a refrigerated glovebox.

Watch the video below:

Advertisement
In this article:GM, Motorama, technology