With the increase, 33 percent of shops now are training with I-CAR, up from about 25 percent the year before, according to I-CAR.

An additional 2,000 auto body shops engaged in I-CAR training in 2017, according to the organization.

With the increase, 33 percent of shops now are training with I-CAR, up from about 25 percent the year before, according to I-CAR.

The organization also reported a 27 percent increase in the number of I-CAR Gold Class shops in 2017. I-CAR’s Gold Class count now stands at 5,570 shops across the United States, plus 1,300 shops now on the Road to Gold.

“2017 proved to be another strong year for I-CAR, continuing to build on the progress made since 2010 when the current Professional Development Program was announced,” I-CAR said in a news release. “Over the past seven years, the organization has achieved significant growth as result of its greatly expanded product and services portfolio, plus increasing industry responsiveness to pursue required knowledge and skills levels in the face of the ‘Technical Tsunami.’”

Student participation in I-CAR’s annual welding program is up 700 percent since 2010, with the number of welding training and certification events up 1,300 percent.

OEMs and insurers that specify I-CAR training as a repair network qualifier saw increases as well. As of January 2018, 25 organizations acknowledge Gold Class for their networks, including 11 OEMs and 11 insurers.

Useage of I-CAR’s Repairability Technical Support (RTS) Portal increased 6 percent from 2016 to 2017, according to the “Who Pays for What?” survey conducted by CRASH Network and Collision Advice. In the 2017 survey, 46.6 percent of those polled reported use of RTS, making RTS the industry’s No. 2 source for repair information the third year in a row. 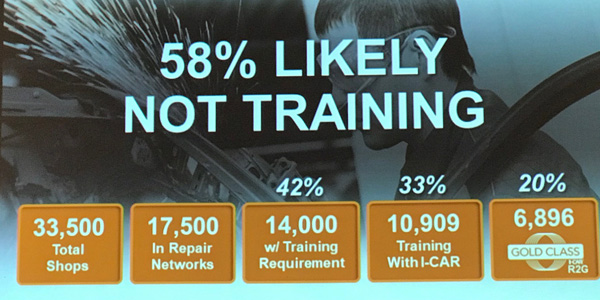 “We still have work to do,” I-CAR CEO John Van Alstyne said during a presentation at the Jan. 18 Collision Industry Conference in Palm Springs, Calif.

I-CAR reports that more than 260 training sites have been established as of January.

Currently, 62 percent of secondary and postsecondary schools utilize I-CAR’s Professional Development Program – Education Edition, all achieved since the program was introduced to schools in 2012.

Additionally, with the launch of In-Shop Knowledge Assessment in 2017, I-CAR’s education, information and services portfolio now includes 14 distinct product and service offerings, up from four in 2010.

“2017 showed considerable increases in the collision repair industry’s commitment to training,” I-CAR CEO and President John Van Alstyne said. “From OEMs and Insurers acknowledging I-CAR programs, to technical schools and suppliers working in concert to help secure sites for better learning environments, to more and more shops now understanding the critical need to train and the value it creates for them, I commend the progress our industry is making towards performing complete, safe and quality repairs.”

With more participation in I-CAR’s Welding Training & Certification over the past five years, the number of not-I-CAR-trained shops has improved, according to the organization:

“So we are far from done,” Van Alstyne said. “It is our obligation as a neutral, not-for-profit organization to ensure every technician is provided with the knowledge and skills required to perform proper repairs. While we have accomplished a lot as an industry, especially in 2017, we still estimate that 58 percent of technicians are likely not training, and not to the level required. We need to do better, and we will do better.”

I-CAR made a number of “organization enhancements” to its leadership team in late 2017, including:

Prior to joining I-CAR, Johnson spent 27 years with Tower International, a top 100 global Tier 1 automotive chassis systems supplier, where he was most recently vice president, IT Americas.

Advertisement
In this article:Gold Class, Welding

I-CAR Reports Gains in Training Participation, But More Work to be Done