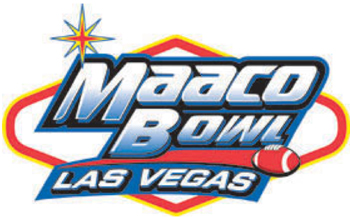 ESPN Regional Television (ERT), a subsidiary of ESPN, and the MAACO Bowl Las Vegas have announced that the 2012 game will be played Saturday, Dec. 22, at 12:30 p.m. PT (3:30 p.m. ET) at Sam Boyd Stadium. The 21st MAACO Bowl Las Vegas will be televised nationally on ESPN, featuring the top choice from the Mountain West against the fifth pick from the Pac-12 Conference.

This will mark the sixth Saturday kickoff in MAACO Bowl Las Vegas history and first since 2008. It will also be the sixth day game in the event’s history but the first since UCLA downed New Mexico 27-13 on Christmas Day 2002.

“Every year we study possible dates that make the most sense for the fans and teams as well as providing the most economic impact for Las Vegas,” said Tina Kunzer-Murphy, MAACO Bowl Las Vegas executive director. “With the way the calendar worked out this year, we were excited to get back on a Saturday and also to be able to play in the sunshine.”

The MAACO Bowl Las Vegas is owned and operated by ESPN Regional Television, which markets and owns a total of seven bowl games.