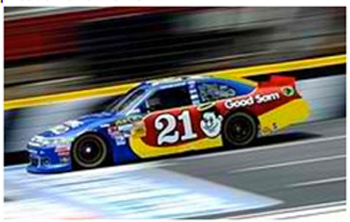 The competition in the NASCAR Sprint Showdown and Sprint All-Star Race wasn’t just for the $1 million purse – it also was for top honors in the inaugural 3M Paint with Pride competition.

To celebrate the 10th anniversary of the 3M PPS System, 3M Automotive Aftermarket held a competition for NASCAR Sprint Cup Series teams and their car painters to show off their best work and win prizes. 3M Paint with Pride selected the car with the best paint scheme that ran in the NASCAR Sprint All-Star Showdown Race and All-Star Race under the lights at Charlotte Motor Speedway. The winning team was selected based on paint scheme design, creativity, application and theme.

The winner, selected by a judging panel comprised of Al Pearce of AutoWeek, Ray Evernham of ESPN and Doug Rice of Performance Racing Network, was the No. 21 Good Sam/Camping World Ford driven by Trevor Bayne for Wood Brothers Racing.

This is the first time the Wood Brothers have run the paint scheme featuring Good Sam and Camping World. The car was designed with bright reds, blues and yellows to be highly visible under the lights. It was unique in that it was a “make good” from 2011 when the two sponsors were supposed to be on the car and Trevor Bayne wasn’t able to run the race because of his illness.

"It’s a thrill for us as a company to win the 3M Paint with Pride competition," said Len Wood, co-owner of Wood Brothers Racing. "To be associated with such reputable companies like 3M and Good Sam/Camping World speaks volumes about the strong partners we have in the NASCAR community. I would also like to thank Mike Smith for his tireless work and dedication to this project and the entire company. It takes great skill and vision to take a drawing from paper and transform it into a viable, NASCAR-approved Sprint Cup Series paint scheme."

Other top finalists included the No. 17 Fifth Third Ford driven by Matt Kenseth, the first race for new sponsor Fifth Third Bank, bringing a new look for the No. 17 car. The car featured Sherwin-Williams paint and 3M vinyl decals. Also in the top three was the No. 16 3M American Red Cross Ford driven by Greg Biffle, featuring a special patriotic red, white and blue design with American Red Cross on the hood and the TV panel featuring the names of the top American Red Cross donors from all 50 states. The car design included Sherwin-Williams paint and 3M vinyl wrap.

“We had a number of amazing entries in the 3M Paint with Pride competition, from matte finishes to resto-rod designs to new sponsor paint schemes for cars,” said Dale Ross, U.S. marketing operations manager at 3M Automotive Aftermarket Division. “The paint scheme designers and car painters at the race shops have really shown incredible creativity combining advanced painting techniques, unique paint formulations, and vinyl wraps and decals to create the beautiful race cars you see on the track today. This competition is really a testament to their talents and hard work.”