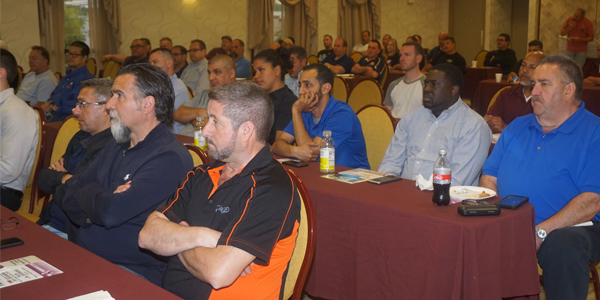 The Alliance of Automotive Service Providers of New Jersey (AASP/NJ) announced that it hosted two successful training events on May 22 (Holiday Inn, Totowa) and May 23 (Clarion Hotel, Toms River), which both drew a large number of collision repairers who were eager to learn how National AutoBody Research’s (NABR) Variable Rate System (VRS) could help them fight and win the constant battle over labor rates.

The VRS, developed by father-and-son team Richard and Sam Valenzuela, compiles posted rates and insurance documents from collision repair shops into a database. This data can then be used as ammunition by shops fighting to get paid more than what the dictated labor rate suggests.

“Have you ever been told, ‘We don’t pay for that,’ or, ‘No one is asking for that’? Well, that is not true,” said Sam Valenzuela. “They will pay and we have the data as proof.”

He then proceeded to pull up page after page of data on the big screen to demonstrate the proof exists.

The Valenzuelas encouraged everyone to take the first step and complete the VRS survey (laborratesurvey.com), which collects shops’ posted rates (or door rates) – the amount they determine to be the cost for properly fixing vehicles based on equipment, certifications and training.

“Market rates are rates that you should determine. Insurance companies don’t determine these rates unless you let them,” said Richard Valenzuela. “What is interesting is that [insurance companies] will never show you any data. They just tell you what the rates are in your market and you are supposed to just believe them. It’s time to stop operating under this belief and start fighting back with accurate data, which puts ‘bullets in the chamber.”

To further prove the Valenzuelas’ point, a VRS search was done to show what shops are reporting as their posted rate for body work. The results were significantly higher than where New Jersey’s so-called prevailing labor rate currently stands. The search also brought up 200-plus insurance documents that serve as proof that insurance companies will pay more for this work.

The VRS system also allows subscribers to search insurance documents to see if companies are paying for certain procedures. With this kind of knowledge, a shop owner can provide a counterargument when being told, “We don’t pay for that.”

“This is hard data,” said Richard Valenzuela. “We aren’t making this up. We are taking it right off the insurance documents. Data is the only way you are going to win this war. You can’t win this war by rejecting the data. What proved the world wasn’t flat? Data.”

Added Sam Valenzuela, “We can change our mindset. If you think your industry is just the way it is and it’s never going to change, you probably won’t survive.”

Encouraging shops to get on board with the system by taking the survey is also a key in uniting the industry as strength in numbers can go far.

“If we all start bringing it up, if we all stick together, we can make a change,” said Jerry McNee, president of AASP/NJ.

Added AASP/NJ Executive Director Charles Bryant, “With the Variable Rate System, shops now have a strong basis for their argument that the current labor rates being paid by most insurers does not reflect the true fair and reasonable labor rates that shops deserve for the services they provide.”