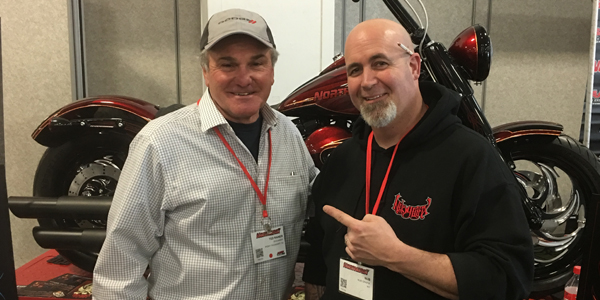 The bike, customized by Nub of Nub Grafix and Peters Body & Fender (Oakland, N.J.), was auctioned off through a silent auction that lasted the entire weekend of the show. Rainer places high importance on who painted the bike and the fact that it is a symbol of the show’s 40th anniversary.

“That is what makes it a piece of art,” said Rainer. “If it was just a regular Harley off the shelf, it wouldn’t mean as much.”

The Ocean Bay Auto Body owner is also honored to ride something that symbolizes AASP/NJ, which has been a major benefit to him over the years.

“I’m proud to own something that represents the association,” Rainer said. “I don’t think I’d be where I am without AASP/NJ.”

Nub, who attended his third NORTHEAST this year, worked on the bike throughout the weekend, adding pinstriping and impressive flair to parts that were previously painted at his Walden, N.Y., shop. Not surprisingly, this attracted enthusiastic crowds throughout the show.

“I think a lot of people, especially nowadays, look at artwork and any kind of painting and automatically think it’s a decal,” said Nub. “A lot of people have the mentality that everything is wrapped and nothing is painted. To actually be out and in front of people performing your craft live benefits everybody in the industry I’m in. The more people are doing it in public, the better.”

To view video of the bike as well as more of the NORTHEAST 2017 show, visit www.youtube.com/user/AASPNJNORTHEAST. For more information about AASP/NJ, visit aaspnj.org.

Advertisement
In this article:AASP-NJ, NORTHEAST show