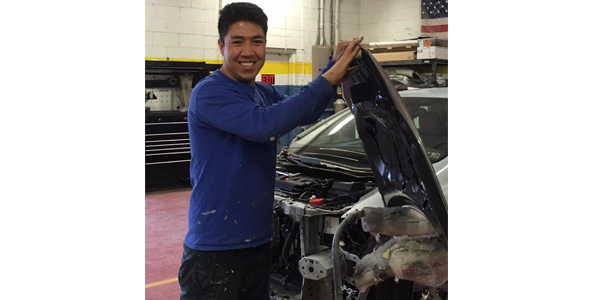 Good techs are hard to find. So when a woman came to the Moppert Brothers auto body shop in Morton, Pa., to inquire about a job for a young refugee from Afghanistan, Harry Moppert Sr. decided to give the kid a chance.

Good techs are hard to find. So when a woman came to the Moppert Brothers auto body shop in Morton, Pa., to inquire about a job for a young refugee from Afghanistan, Harry Moppert Sr. decided to give the kid a chance.

The woman was the guardian for Najib Amir, a high school student starting a new life in the United States. Amir’s English was poor, so Moppert asked one of his longtime techs – who happens to speak Persian – to talk to him.

“They spoke for 10 minutes in Persian, and then Joe turns to me and says, ‘He’s a good boy. I know where his family is from. You hire him,’” Moppert recalls. “So I did, and he worked with us that summer, and we gave him all kinds of different tasks to see what he could do. He watched and learned, and he got really good – very quickly.”

Recognizing that Amir had talent, Moppert helped him enroll in Delaware County Technical High Schools. For the past three years, Amir worked at Moppert Brothers during his summer break. For the 2017-2018 school year, which started in September, Amir worked at Moppert Brothers in the afternoons as part of the school’s cooperative education program, enabling him to get valuable on-the-job training that counted toward his degree requirements.

“Some of the guys who’ve been with me for 20 years worked with him, and I actually had one of my retired guys come in and work with him a couple days a week,” Moppert explains. “I saw the talent this kid had from the very beginning, and we developed his talent.”

The school system recently named Moppert Brothers its Co-Op Employer of the Year, and Amir its Co-Op Student of the Year.

The story gets better. Earlier this month, Amir graduated from high school, and started as a full-time Moppert Brothers employee, making “a legitimate B-class technician’s rate.” Amir, 21, soon will be able to move out of his host family’s home and find a place of his own. 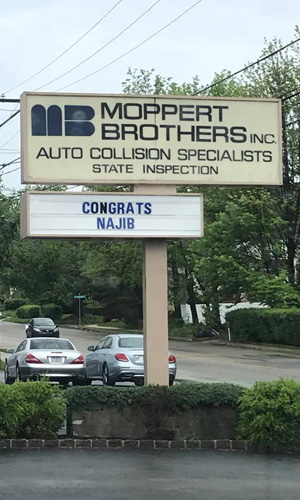 Amir already has participated in some vendor training, and now that he’s full-time, Moppert Brothers plans to enroll him in I-CAR classes.

“Now he’s doing door skins. We haven’t gone to a full quarter panel yet, but he’s pretty competent for his age,” Moppert says. “ … We’ve seen other kids take much longer than that to not even be where he is after two years.”

To help Amir build his vocabulary, Moppert developed a list of automotive terms and pictures of the corresponding automotive parts. Amir’s English has improved greatly since he came to Moppert Brothers in summer 2015, but Amir admits that he still struggles with it.

“I still have a lot of problems, but better than before,” Amir tells BodyShop Business.

He knows enough to convey his love of collision repair. Amir says his father had an automotive repair shop in Afghanistan, and he was able to learn a few things when he was growing up there.

“Basically, I like everything about the car,” he says.