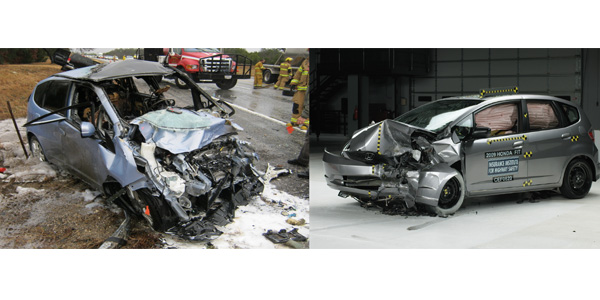 The Insurance Institute for Highway Safety (IIHS) has a different take on the recent crash tests that attorney Todd Tracy commissioned to show the disparity between OEM and aftermarket parts.

At left is the collision-damaged 2010 Honda Fit that was at the center of the John Eagle Collision Center lawsuit. At right is a 2009 Honda Fit after being subjected to an IIHS moderate overlap test.

The Insurance Institute for Highway Safety (IIHS) has a different take on the recent crash tests that attorney Todd Tracy commissioned to show the disparity between OEM and aftermarket parts.

After analyzing the publicly shared crash-test data and videos, IIHS concluded that even though the 2013 Honda Fit modified with some aftermarket parts performed poorly in Tracy’s tests, the structural results were similar to the institute’s past evaluation of the 2009 Honda Fit in its moderate overlap frontal test.

“Based on a scientific analysis of the data, we conclude that the results indicate that the Fit equipped with non-OEM aftermarket parts in the Tracy test performed on par with our evaluation of the good-rated 2009 Fit, with across-the-board good scores for structure, injury measures and restraints and kinematics,” IIHS said in an advisory to its members. “The variation across the three Tracy tests is similar to what we have observed conducting repeated tests of identical model vehicles. Our evaluation of the publicly shared results hasn’t uncovered concerns about the aftermarket parts used in the law firm’s demonstration tests.”

The Tracy-commissioned tests, which took place at Karco Engineering’s crash-testing facility in Adelanto, Calif., involved three Honda Fits: A 2009 with its original OEM parts (the control vehicle); a 2010 with a glued-on roof and an aftermarket windshield; and a 2013 fitted with an aftermarket hood, radiator support, windshield, bumper reinforcement bar, left and right fenders and left and right hood hinges. Karko Engineering subjected each vehicle to a moderate frontal overlap crash test at 40 mph.

When Tracy announced the crash-test results in January, he said the performance of the all-OEM Honda Fit replicated previous IIHS tests showing that the occupants of that vehicle should be able to walk away from an accident. Conversely, the data from the 2010 fitted with some aftermarket parts and the 2013 with the glued-on replacement roof indicated “that both the driver and passenger would suffer broken legs, ankles and feet,” he said.

In its analysis, IIHS asserted that while the data could point to “a somewhat increased risk of injury compared with the test of an unmodified Honda Fit, the overall rating for the cars in both tests would be good according to IIHS protocol and consistent with our own test.”

“It is possible that replacing the bumper reinforcement, radiator support and left front wheel with non-OEM alternatives in the test of the 2013 Fit resulted in somewhat more toepan intrusion and a slight degradation of protection for the driver’s left knee/thigh/hip and right foot/ankle,” IIHS said. “These were the only measurements reported by Tracy and Karco that varied from the baseline results by more than would be expected in exactly repeated crash tests.”

In its advisory, IIHS noted that it makes a distinction between cosmetic and structural aftermarket parts.

“Our previous research has shown that cosmetic parts don’t alter crash-test results, so where they are sourced – whether aftermarket or OEM – is irrelevant,” IIHS said. “Fenders, quarter panels, door skins, bumper covers and trim aren’t responsible for safeguarding occupants in a crash. That is the job of structural parts.

“Structural parts make up the front-end crush zone and safety cage. The crush zone absorbs crash energy, and the safety cage helps protect occupants by limiting intrusion. Replacement structural parts must exactly replicate the original parts to preserve the integrity of a vehicle’s crashworthiness, whether they are sourced from the OEM or an aftermarket supplier. Our research shows that some aftermarket non-OEM parts can meet these requirements. We continue to stand by that conclusion.”

Tracy has said that the test results point to an increased risk of head, neck and leg injuries in the Honda with the aftermarket parts and the Honda with the glued-on roof. Noting that its tests measure the amount of intrusion into the occupant compartment – a key factor in determining vehicle crashworthiness – IIHS acknowledged that there are seemingly large differences between the injury data for the unmodified 2009 Honda Fit (in separate tests conducted by Honda and IIHS) and the aftermarket-fitted 2013 Honda Fit.

However, none of that data points to “a high risk of a severe injury,” according to the institute.

“Similarly, the compression forces recorded on the left femur in all four tests also are well-below the level (7,300 N) at which the IIHS protocol would downgrade its assessment of protection for the knee, thigh and hip because serious injuries, including fractures, wouldn’t be expected below this level,” IIHS said. “In fact, a force of 10,000 N is a passing grade for regulatory frontal crash tests. Charts in the Karco test reports show that all the injury measures used by IIHS for injury risk evaluation are below the threshold for a downgrade from a ‘good’ to an ‘acceptable’ rating.”