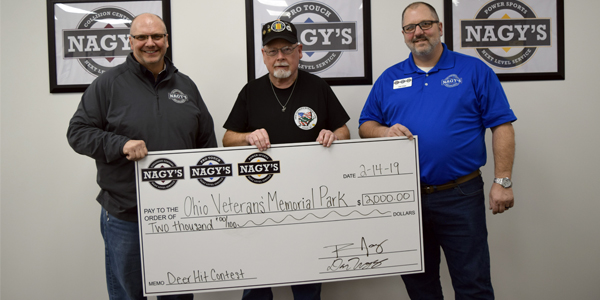 Nagy’s Collision Centers announced that its annual “Hit a Buck, Donate Some Doe” campaign was a success again this year, awarding donations to three local charities selected by employees and voted on by customers.

Nagy’s Collision Centers announced that its annual “Hit a Buck, Donate Some Doe” campaign that benefits local charities was a success again this year, awarding $2,000 to the Ohio Veterans Memorial Park, $1,500 to the Christian Children’s Home of Ohio, and $1,000 to the Haven of Rest.

This year, 213 vehicles impacted by deer hits have been brought to Nagy’s for repairs – an increase from 171 hits last year. Nagy’s had their employees choose charities of their choice to receive donations, and customers who came in with deer hits were able to cast their vote for one of the three charities, with first-, second- and third-place prizes.

“Each year, the months of October through December have the highest vehicle accident rates involving deer,” said Ron Nagy, president of Nagy’s Collision Centers. “Our goal at Nagy’s is to turn these unfortunate incidents into something positive while giving back to the local communities we are in.”

Advertisement
In this article:Nagy's Collision Centers