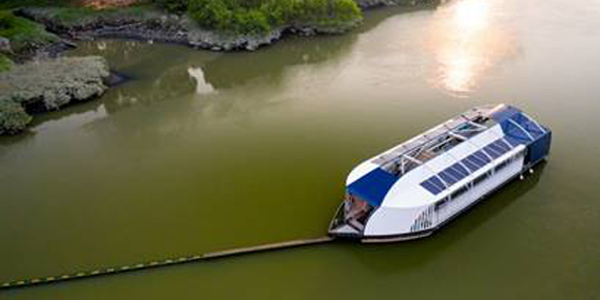 A new project to help rid the seas of plastic waste has been launched by The Ocean Cleanup, with AkzoNobel providing coatings technology for the garbage-gathering system.

A new project to help rid the seas of plastic waste has been launched by The Ocean Cleanup, with AkzoNobel providing coatings technology for the garbage-gathering system.

The latest venture is focused on the Interceptor, a floating device which can extract plastic debris from rivers – preventing it from adding to the build-up in the oceans. Already tested in the Netherlands and South East Asia, the plan is to place Interceptors in 1,000 rivers over the next five years.

“As official coatings partner to The Ocean Cleanup, we’re fully committed to supporting the fantastic work they’re doing to stop the world drowning in plastic,” says Jean Michel Gauthier, global business director for AkzoNobel’s Marine, Protective and Yacht Coatings business. “As well as supplying marine coatings with a proven track record, our experts were also involved in the design of the Interceptor devices, so we’re excited to see them deployed in rivers around the world.”

Capable of extracting up to 100,000 lbs. of trash per day, each Interceptor system has a storage capacity of 13,000 gallons (roughly the volume of 10 adult elephants). The devices feature protective coatings from AkzoNobel’s International product range, notably Intershield 300 – an industry-leading anticorrosive universal primer with an extensive track record of 30 years. The supplied coatings system provides high performance anti-corrosion, with minimal maintenance required.

“We’re proud to be part of this new chapter in The Ocean Cleanup’s ongoing war on plastic waste,” said Gauthier. “We’ll continue to collaborate and offer all our know-how and expertise to help realize their ambition of cleaning up the world’s oceans and rivers.”

The partnership between AkzoNobel and The Ocean Cleanup was launched in 2017. Technical teams from both parties are continuing to work closely together to develop coatings solutions for the ocean cleaning systems, which are still in the prototype phase. Testing of the devices is continuing in the Great Pacific Garbage Patch, with work on the latest prototype already underway.