By BodyShop Business Staff Writers
May 24, 2010

At a presentation held May 19 in Valley View, Ohio, Denise Caspersen, ASA Collision Division manager, outlined to a group of about 20 repairers what issues the division is working on and what some of its recent accomplishments have been.

Five top issues on its radar include aftermarket parts quality and safety, the repeal of the McCarran-Ferguson Act, federal regulation of property/casualty insurers, data ownership and paintless dent repair.

“Also, we’re striving for more of a discernment of the level of quality of aftermarket parts,” Caspersen said. “Right now, as I understand it, parts are listed by cheapest price in IP systems.”

One of the attendees, Frank Lanza, owner of Highway CARSTAR Collision in Chagrin Falls, Ohio, said he has a simple way of dealing with aftermarket parts.

“I politely tell the insurer to call the customer and ask him if he’s okay with imitation parts,” Lanza said. “I tell them I need a signed form that basically says, ‘At the direction of the insurer, we have put aftermarket parts on your car, and any recourse you have is through the insurer.’ It’s the law in Ohio, and they can’t expect me to break the law. Insurers have successfully shifted the burden on us, but we’re liable. They’ve taught us to do their dirty work, and they maintain plausible deniability.”

Caspersen made it clear that ASA supports the repeal of the McCarran-Ferguson Act, which has exempted insurance companies from anti-trust laws since 1945.

“It gives insurers a way to compare labor rates,” she said. “When it was first passed long ago, the initial thought was that it would keep prices lower for consumers, but this has not happened.”

Those repairers who are in favor of keeping state regulation of insurance believe that the repairer lobby effort would be no match for the insurance lobby effort at the federal level.

In reference to Web-based data storage within estimating systems, Caspersen said there has been concern about what’s being done with shops’ data and what happens if you switch information providers. She said she was aware that certain information providers are addressing the issue, but the “confidence is missing from repairers.” One attendee stated that “information is currently being shared and sold, which is why repairers don’t trust what’s going on.”

Caspersen said ASA has become concerned about market pressures by major vendors to only use their contracted technicians for paintless dent repair (PDR). She cited a new Farmers Insurance policy that states that shops, if subcontracting out the work, must use PARS or Dent Wizard.

“PDR will be high on ASA’s radar this year,” Caspersen said. 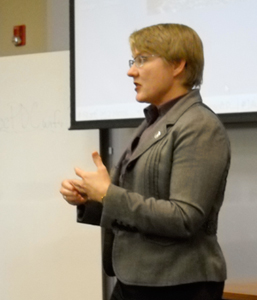 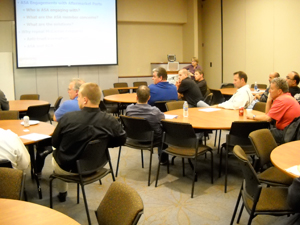