The Automotive Service Association (ASA) honored several of its members Thursday during the ASRW Award Ceremonies. Held in Orlando, Fla., during NACE and CARS, the annual awards event provides a platform in which the association and other industry groups may acknowledge the achievements of some of its outstanding individuals.

During the awards ceremony, Tschanen Brandyberry, Motor Age managing editor, presented ASA’s presiding chairman, Ron Nagy, AAM, with a red die-cast replica car in honor of his contributions to the industry. Honoring the ASA chairmen in this way is a longtime tradition of the publisher.

• The Alpha Award recognizes an ASA Mechanical Division member for his or her generous and far-reaching contributions to the automotive service industry. Howard Pitkow, AAM, Wagenwerx Inc., Wyndmoor, Pa., was the recipient of this year’s honor.

• The Phoenix Award recognizes an ASA Collision Division member for his or her contribution to the automotive service industry. Mike Schoonover, Schoonover Body Works and Glass Inc., Shoreview, Minn., was the recipient of this year’s award.

• The ASA Benefit Provider of the Year is presented to a sponsored benefit provider in appreciation of its relationship with ASA, and for the value, quality and professional service it offers to ASA members. This year’s recipient was Meadowbrook Insurance Group, Overland Park, Kan., which has a 30-year relationship with the association.

• The ASA Legislative Award recognizes those who have made an impact on legislative and regulatory activities. This year’s award posthumously honored the late Paul Duncan, AAM, Duncan’s Collision, Boardman, Ohio.

The following industry awards were also presented during the event:

NACE and CARS will be held during Automotive Service and Repair Week (ASRW) next year when the events move to New Orleans, Oct. 10-13. 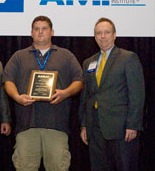