Association expects final registered attendee numbers to be up 75 percent over last year; likelihood of returning to Detroit next year strong. 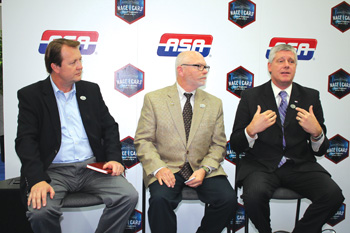 After a long week jam-packed with event after event, ASA and Stone Fort Group leaders sat in front of reporters last Friday and described the show as a resounding success.

“In a nutshell, we are absolutely thrilled with the outcome of the show,” said Darrell Amberson, chairman of ASA. “The attendance here on the floor, the education track, and the peripheral meetings were all great. There were very few complaints, and lots of accolades.”

Dan Risley, president and executive director of ASA, supported Amberson’s view, stating they were thrilled with the outcome after not knowing what to expect.

“We had hoped for the best. We got the exhibitor support early, which helped. We weren’t sure what the registration numbers were going to be, and I’ll tell you early on it was a little scary. But the last three months, it went way up. The only unknown was the walk-in traffic. We had the numbers on the floor, and the numbers on preregistration which were up over 35 percent, and we wanted to see what the walk-in traffic would be. If you ask the exhibitors, they would support our assertion that it was a very successful show, not because we’re saying it, but because the vendors felt it.”

Brian Nessen, co-founder of Stone Fort Group, the management company that put on the show, commented on the type of attendees they had sought.

“The direction from the ASA board and leadership was not to focus on the number of attendees in body count but the quality of attendees,” he said. “It was very key to get shop owners and decision makers to get on the floor to look at equipment and ways to improve their shops to prepare for modern autos. That equipment is here on the floor, and the people who were here are the most progressive shop owners, and that was our goal.”

Risley commented on the choice of Detroit for this year’s show.

“One thing we looked to accomplish by having it in Detroit was having a show for the industry, about the industry, and we wanted people to participate on the show floor. Not that we didn’t want them to enjoy the city, but we wanted them here, in the demo area and classrooms. If you spent any time on the floor or hit a class, you saw that the people who attended actually participated.”

Regarding the high participation, Risley said the demo are was so successful that they’re planning on expanding it in 2015.

“Quite a few exhibitors were a little upset frankly that they didn’t get a chance to participate after seeing the success it had and asked if they could be considered in that area next year,” Risley said.

Amberson said the huge number of events from the classes to the tours to the symposiums was intentional.

“We knew from the beginning we had two stigmas to overcome: the stigma of Detroit and a declining show in the past. It was our hope that we would have such high quality exhibits, tours and educational tracks and knowing we may disappoint some people because we had so many activities. We were frankly hoping to hear the complaint that there were too many things to do – what a nice, refreshing change from the past! Our hope was that people who were here would go home and say what I experienced was great, I couldn’t get to everything, and Detroit was great, and cause the show to be bigger next year.”

Risley praised the local support for the show during the Opening General Session on Thursday, and reiterated his comments at the close of the show Friday.

“If you walked the show floor, you probably saw that a state trooper was present both days with his vehicle. That wasn’t hired security, that was a state trooper volunteering his time to be here to show that the state of Michigan cared about our show. Through your trails throughout the week in Detroit, if you didn’t experience a good thing with a cab driver, someone who worked at the hotel or someone who worked at the Cobo Center, it would be a surprise. We have continued to receive nice feedback from folks who said the people were really nice. It almost seemed the people here were in a customer service class on what it takes to win people back because they made a tremendous effort – not because of Darrell or Dan, but because they care about and have a lot of pride in their city.”

Risley said for next year, adding a Saturday is under serious consideration due to many requests from exhibitors and attendees.

“We’re going to consider a Saturday next year because we had a lot of requests. But when Darrell and I had to make the announcement that we were going to move the show to Detroit, we knew most people would be like, are you sure? And then if we were going to tell them we were going to hold it nine months later in the summer, they would say are you sure again. And if you guys were at Mandalay Bay nine months ago and saw how small the show floor was and saw the traffic, and then we told you we were going to go to a three-day show in summer in Detroit, I’m not sure a lot of people would have supported us right out of the gate. But we’re very happy to say we have had many exhibitors say, why not Saturday, due to all the activity they saw this year on the floor.”

Nessen said the Thursday-Friday timing also tied in with the attendees the show was targeting.

“The people who can take Thursday and Friday off are usually the higher level decision makers.”

Risley wouldn’t say for sure if the 2015 show would come back to Detroit, but he said based on feedback that he feels there is a 90-plus percent chance it will.

“Our exhibitors are asking us if we’re going to come back here, and we’re saying do you want us to come back here? Because ultimately, if they’re happy, we’re happy. We’re happy and could say Detroit, but if we go around and talk to our big exhibitors and they say it wasn’t a good show and we didn’t like the venue, then it doesn’t matter what we like. But we haven’t heard that.”

For the sake of being accurate and transparent, the trio would not give out attendance numbers as a final tally hadn’t been completed yet. But Amberson did say registered attendance was up close to 75 percent over last year, and they expected that number to climb once the final numbers were in. Last year, there were roughly 5,000 registered attendees. At the time of the press conference (4:00 p.m. Friday), Nessen said they were still getting people registering 45 minutes prior.

“A lot of the exhibitors took a chance this year,” said Risley. “They said we will give you one more chance. We felt the pressure, but we made a lot of changes to respond to those needs, and I think the attendees and exhibitors have equally responded back with an affirmation that was positive. If you saw the demo areas, which was a new thing at this show that we can’t do anywhere else in the country, people were flocking to the back of the show floor and filling those seats. It’s an interactive show about the industry. Also, if you were at last year’s show, we had some people who had a booth but were not relevant to our business. This year, 98 percent of what you saw was relevant to our business.”

The Collision Industry Conference (CIC) and I-CAR Annual Conference contributed to making this week a true “industry week,” and Risley said CIC has verbally committed to follow the show wherever it goes, and I-CAR will be making their decision as to whether to hold their annual conference next year in the same city/timeframe as NACE CARS within the next 30 days. I-CAR has, however, verbally committed to being back in the stage area of the show next year as it was this year.