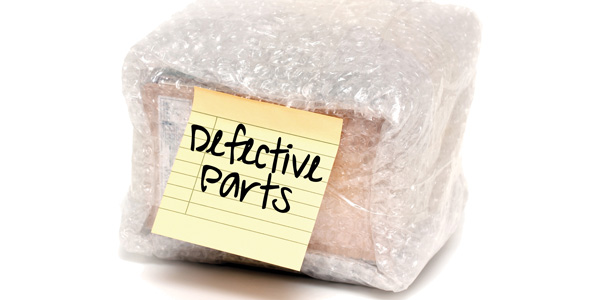 The insurer wants us to return defective parts that we warned them from the beginning may not fit as good as the originals. Are we obligated to do this?

The insurer wants us to return defective parts that we warned them from the beginning may not fit as good as the originals. If we return them, they may be sent to other repairers, even though they don’t fit properly. Are we obligated to do this?

This is a problem that many have struggled with that doesn’t need to be a problem if handled in a businesslike manner.

First of all, you need not answer to the insurer nor look to the insurer for a resolution. Your customer is who you work for and who will be paying for the repair, and so you should look to them for direction in how they want their vehicle repaired. You are responsible for the manner in which you conduct your business and how well you manage and meet their expectations and avoid unnecessary liabilities for both you and your company.

As I often say to our coaching-consulting clients, “It’s your money and you can give it away if you want…you just can’t do it for very long and survive! And rather than merely ‘survive’…why not thrive?’” If one doesn’t stand for something…they may fall for anything!

Why shouldn’t a repairer charge a reasonable fee to return acquired parts (which were procured at the direction of their customer), regardless if they’re actually used in the repair or not?

First of all, I agree that ill-fitting, defective parts that you send back will likely be re-distributed to others. But unless you pay for them and destroy them, you cannot prevent others from re-selling them. What you can and should do is not lose money on them.

In the auto service industry, part of the repairer’s profits is in re-selling parts and materials. Profit is derived from the purchase (wholesale) and re-selling at a reasonable profit (e.g. MSRP), which provides compensation for the repairer’s efforts for the various tasks associated with that service, including but not limited to:

Time, effort and liabilities associated with:

Of course, returning an acquired part (that was requested by the customer) requires the exact same effort and handling as acquiring it, so to suggest that the repairer should merely absorb this added effort, cost and risk for no compensation is at best nonsensical.

It’s even more problematic when the parts at issue were ordered due to another entity wanting to save money and electing to do so against the expert opinion of the repair professional.
This problem can often involve new OEM parts that were ordered simply due to a poorly prepared estimate and, as a result, the vehicle was deemed a total loss during the actual repair. Again, this was likely due to an insurer’s efforts to minimize their claim pay-out.

While this may prove beneficial and profitable to the insurer, presuming the customer was made aware of the potential problems and associated costs and thus authorized the repairer to proceed, such incurred efforts and costs become added charges for the services rendered. After all, it’s not the repairer’s fault. It’s simply not good business for the repairer to eat the related efforts/costs. For a repairer, this is not “the cost of doing business”…this is the cost of going out of business! It is, however, the cost of business for the insurer that chose to write insufficient estimates in the hopes of merely “cashing out,” as their business model may dictate.

This is no different than ordering a meal at a restaurant and, upon receiving it, deciding it doesn’t suit your taste and ordering something different or cancelling the order because you’re no longer hungry. Most would expect to pay for the restaurant’s efforts and take it home with them.

This is why ADE repairer coaching/consulting clients are encouraged to consider assessing full retail pricing for all parts procured at the customer’s request and authorization. Upon delivery, the original mark-up (wholesale vs. retail) would have been earned by the repairer for services rendered to that point…then they would earn the labor to refinish and install them.

Furthermore, should the customer change their mind or find that the called-for parts were defective and request they be returned for a refund, a “parts return fee” by the repairer would apply and be assessed (equal to the original amount earned in acquiring the part[s] since the same efforts, activities and liabilities would be incurred in returning them).

In the end, the customer would then be provided a refund of the full retail cost as charged less the initial amount earned via acquisition (the difference between wholesale and retail) and an equal amount for the “parts return fee.” Once received, any remaining amounts would be reimbursed to the customer or their insurer as they desire.

Note: These charges would be in addition to any “parts restocking fee” that the vendor/supplier may assess.

Keep in mind, too, that the customer or insurer has the right to merely pay full price for the no-longer-desired part(s) and a) not return them, or b) pay for them, pick them up and return them themselves to save the added handling fees. After all, you’re there to assist and accommodate your customer in an effective and efficient manner.

ADE has forms and a “parts return policy” that we provide our ADE repairer coaching/consulting clients that clearly explains this, as well as an authorization-notification for customers to read and sign that fully explains the repairer’s policy and pricing and provides authorization for the repairer to procure such parts. This way, there are no unwelcome surprises later in the repair.

Repairers do what they do to earn a fair and reasonable income. It is both unreasonable and unfair to suggest that they should acquire parts they don’t recommend due to known issues and potential liabilities and then, when proven correct, be compelled to return such parts for no compensation for their further efforts and risks. It’s simply “cents-less.”

Ask the Expert: How to Deal with Defective Parts