Sometimes appraisers lie — so if you buy everything they’re telling you, you won’t make enough money to buy much else. 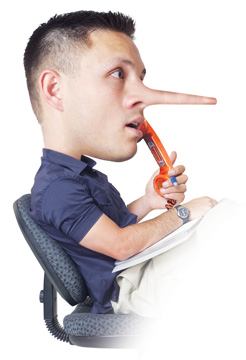 We all hate it when insurance companies move personnel around. (That
is, unless a current appraiser in your area is a scoundrel.) After all,
if you’ve built a relationship with an appraiser or an area claims
manager conducts business fairly (and you can actually make a profit
repairing cars insured by that particular insurance company), personnel
changes can cause you grief.

For example, some changes were recently made at AIG, a company that
last year was voted one of the better companies operating in
Connecticut by the members of the Auto Body Association of Connecticut.
I’m not entirely certain of the details of the changes, but I do know
that I now have a new appraiser to deal with and that the appraiser
told me management had been restructured.

For the past couple of years, I’ve dealt with a great appraiser. He’s
knowledgeable and easy to work with. He understands our operation and
pays us for what we do. And he pays us a fair labor rate. Only once,
when he was on vacation, did I have trouble with his company (and I
filed a complaint with the Connecticut Department of Insurance against
the replacement appraiser and his boss for lying to me about other
shops willing to repair a vehicle at a lower labor rate; it turned out
the appraiser never called any other shops).

Anyway, this new appraiser showed up last week to look at a Mercedes
hit in the front. It was an older car and no used parts were available,
but it still was repairable. The new OEM parts made the appraisal
pretty high, something that threatens an appraiser’s severity rate or
average claim amount.

The appraiser LIED and told me that he had the vehicle owner on the other line, waiting for my decision, and that the owner had talked with two other local shops that were willing to repair the car for the insurance estimate.
Advertisement

On content, our estimates were comparable, but his labor rate was $6
less than what I was willing to accept. I tried to negotiate with him,
but he told me it was all he could pay. He also wanted me to produce
the invoices for the two tows it took to get the vehicle to my shop.

I told him no way. Those are private, internal business documents, and
he had no right, or need, to see them. He had my printed tow bill, and
that was enough.

I asked him who his boss was. He gave me the person’s name and phone
number, left me a copy of his deficient estimate and drove away.

I called his boss, who referred me to a regional claims manager. The
claims manager was a very polite and agreeable guy. I told him what his
company has been paying me for a labor rate for the past two years and
that this new appraiser refused to pay it — and that I wasn’t about to
go backward. He said that he’d take care of it and that I’d hear from
his appraiser shortly.

About an hour later, the appraiser called me and offered me $3 more an
hour, still $3 short of what I’ve been getting. Again, I told him no
way. I had the vehicle torn down, and it was towed here a full week
earlier so I had storage charges, plus a markup on two tows. It would
cost him double the labor rate difference to move the car to another
shop.

The appraiser then told me that he had the vehicle owner on the other
line, waiting for my decision, and that the owner had talked with two
other local shops that were willing to come get the car and repair it
for the insurance estimate. I told the appraiser that was fine. They
could come get the vehicle.

I’d spoken with the owner several times prior to this and had kept him
abreast of the entire situation. He was adamant that I repair his
vehicle and encouraged me to keep trying to get an agreed price. One
way or another, he said I’d be repairing the vehicle. So I was
surprised when the appraiser told me the guy was ready to have the car
moved.

I immediately called the vehicle owner to find out why he’d changed his
mind. No answer. I left him a message to call me back. Maybe I’d just
missed him.

Two hours later, the owner called me and denied talking to this
appraiser, or anyone else from his insurance company that day. He’d
been out all morning and part of the afternoon. There was no way he
could be reached.

He then told me he had a message on his machine from the appraiser. He
said he’d call the appraiser to find out what was going on.

Was it possible that I was lied to again by an AIG appraiser?

About an hour later, I received a call from the appraiser. I don’t know
why he called because I didn’t really give him a chance to tell me. I
immediately asked him why he lied to me, and he played dumb. I told him
that I knew he never talked to the vehicle owner and that he lied to me
when he told me he had the guy on the other line. Again, he played
stupid and told me he meant the adjuster. He had the adjuster on the
other line. Yeah right! That makes sense. I didn’t buy it. I hung up.

Advertisement
Sometimes just asking for more money will get you more money.

Since the regional manager sounded like such a nice guy, I called to
tell him what just happened with his new appraiser. When I told him who
I was, he greeted me nicely and asked how I was doing. I said, “Not too
good.”

“Well, first let me remind you that I have a pending complaint against
one of your appraisers for lying to me in an effort to manipulate labor
rates. Now this new appraiser just lied to me. He told me he had the
vehicle owner on the other phone line, and the owner was ready to move
the car out of my shop if I didn’t accept the low labor rate he was
offering. I refused and contacted the vehicle owner, but the owner told
me he never talked to anyone from the insurance company that day. The
appraiser was trying to hustle me. Is it AIG company policy to lie and
use these tactics to obtain agreed prices at these low labor rates?”

He sounded surprised. “Go ahead and repair the car. I’ll make sure you
get your rate. And if you get any more AIG claims, you can call me
directly. I’m going to call this guy’s supervisor and have him contact
you.”

Wow! That’s the kind of people I like to deal with, although I still
haven’t heard from the appraiser’s supervisor (but I did get my labor
rate on that job).

So what’s the moral of this story? There are a few:

1) Don’t take an appraiser’s word as the gospel. They’re under pressure
to keep costs as low as possible. Insurance companies are using
severity rates to determine raises and promotions. Some appraisers take
too much stock in this system and will do whatever possible to keep
rates low in their area. Some appraisers do have the ability to
negotiate, but they simply refuse. They’d rather resort to dishonest
practices than to let a few more dollars slip through their fingers.

2) If you don’t ask for it, you’ll never get it. Sometimes just asking
for more money will get you more money. Many of you have posted labor
rates that match exactly what the insurance companies are willing to
pay. How will you ever get any more money if you don’t post higher
rates? You can always negotiate down, but you can’t charge any more
than what you’ve posted.

3) Move up the food chain. If you can’t get what you want from someone,
speak to his boss. If that doesn’t work, speak to the boss’s boss.
Eventually you’ll either find someone to give you what you want, or
you’ll reach the top with nothing to show for your efforts. But at
least no one will be able to say you didn’t give it your best shot.

Ask or You Won’t Receive