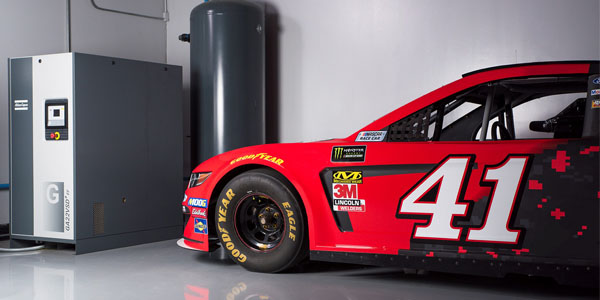 Atlas Copco Compressors has announced it will once again partner with Stewart-Haas Racing (SHR) for the 2021 NASCAR season.

Atlas Copco will also renew its association with Chase Briscoe, who was promoted to SHR’s NASCAR Cup Series program in 2021 after a
nine-win NASCAR Xfinity Series campaign last year. Atlas Copco will be featured on the lower-rear quarter panel of Briscoe’s No. 14 Ford Mustang as he competes for the Cup Series rookie-of-the-year title.

“We are excited for what 2021 holds for Atlas Copco, Stewart-Haas Racing and Chase Briscoe,” said Paul Humphreys, vice president of communications and branding at Atlas Copco. “Last season was difficult for everyone to navigate, but NASCAR’s commitment to operating safely by adhering to strict COVID-19 protocols allowed racing to return and it simultaneously took care of communities and staged some great events. It’s an association we’re proud to maintain in 2021.”

Atlas Copco has been involved with SHR as a technical partner since the team’s inception in 2009, enjoying three NASCAR championships and more than 90 victories.

“I’m very proud to be driving for Stewart-Haas Racing and representing Atlas Copco,” said Briscoe. “They’re more than just a sponsor. Their compressed air systems help us build and maintain our racecars for the track. Preparation fuels success, and we’re always prepared with Atlas Copco.”

NASCAR kicked off its 2021 season with the 63rd Daytona 500 on Sunday, Feb. 14 and will culminate its 73rd year with Championship Weekend Nov. 5-7 at Phoenix Raceway. Briscoe, driver of the Stewart-Haas No. 14, finished 19th in Daytona.