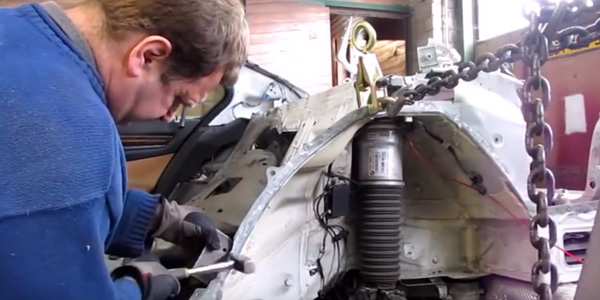 One-man Russian repairer Arthur Tussik might be an internet sensation, but he’s not doing the auto body industry any favors with his homemade videos.

Tussik’s YouTube page has more than 200,000 subscribers, and his Nov. 5 video – showing him repair what should be a total-loss BMW 7 – has garnered nearly 2.5 million views.

But don’t let his popularity fool you into thinking that the video – or any of his videos – is some kind of guide for performing a proper repair, experts say.

“If you’re an insurance adjustor, an estimator, a technician, a body shop owner – no matter what your role in this industry is – please understand that this isn’t right,” says Kristen Felder, founder of Collision Hub. “And it has nothing to do with the skill level. … It’s not the ability for you to put the parts back on and make them look pretty. It’s not even the ability for those parts to stay on the car in a subsequent collision. It’s how that changes energy transfer, and how that energy transfer goes directly to the passenger, and how their life is at stake with the decisions you make when you repair or replace a part. Make good choices. People are depending on you.”

At the request of an OEM representative – who was incensed after viewing Tussik’s Nov. 5 video, Felder says – Collision Hub gathered several auto body experts to dissect Tussik’s repair in a YouTube video of their own.

As they watch Tussik repair the BMW 7, the experts point out his total disregard for BMW’s repair procedures, his use of antiquated equipment – such as the homemade tram gauge – and his lack of personal safety measures.

During the conversation, they also express concern that many online commenters seem to think that his techniques are acceptable, and they rail against media outlets for portraying Tussik as some sort of craftsman or torchbearer for a “lost art.”

“He’s an abortionist,” says Larry Montanez, co-owner of P&L Consultants. “That’s what he is. And if you really think that most of this stuff is repairable, you really don’t belong in this business.”

Where Was the ‘Outcry’?

When the video started making the rounds on social media, it should have sparked “an outcry,” Felder says. Instead, commenters and publications seemed to praise Tussik for being a skilled collision repairer.

“If you didn’t know any better and you saw this, it’s impressive,” says Mike Anderson, founder of Collision Advice and creator of the “Who Pays for What?” surveys. “You watch the whole video, it’s impressive what the guy does – but it’s wrong. You can pull off a bank heist and get away with it and I can say it’s impressive. But it doesn’t make it right.”

Tussik’s repairs are purely cosmetic, and compromise the structural integrity of the vehicle, the experts observe.

“It doesn’t matter what country he’s in – that’s still going to hurt an occupant,” Felder says of his repairs. “That’s not craftsmanship. That’s not talent. That’s not good for this industry. That’s not a real bodyman.”

While it’s tempting to dismiss Tussik as the product of a different culture with different customs and business practices, the experts lament that Tussik’s video series hits way too close to home.

“His welds are better than 75 percent of the industry,” Montanez says. “That’s how sad it is. I’ve been into shops that use resistance welders and I can pop all the welds with just a screwdriver. It’s embarrassing. They should actually be brought up on murder charges.”

Felder puts it this way: “Every time we’re welding on a used quarter assembly or we’re clipping a car, or we’re trying to pull or straighten something that doesn’t need to be straightened, or we’re working on panels because we think they’re just mild steel, or we’re changing the attachment methods because we want to get the car out right, we’re just as bad as this guy in Russia.”