The 2011 WorldSkills Competition in London is now history, having taken place Oct. 4-9, and the SkillsUSA World Team
came home with a silver medal in welding and three additional Medallions of
Excellence in automotive service technology, culinary arts and
cosmetology.

Auto body
competitor Cameron McCreery from Sterling, Colo., finished 11th in the
world, only five points away from a Medallion of Excellence himself.

"That’s quite
an accomplishment in a very tough, global stage where many of his competitors
have been preparing for five to 10 years for this competition," said Mark Claypool, who served as the volunteer team
leader. "Competitors cannot be
any older than 22 the year they compete, so that means that some of the
competition we face have been training from as early as age 12!"

Claypool gave much credit to McCreery’s USA technical expert, Terry Angel, who is an instructor from
Warren Technical College and a coach for VeriFacts Automotive. The pair spent a great deal of
time over the past few months getting prepared for the challenges that Cameron
would face at the world level.

This year’s
WorldSkills Competition attracted over 200,000 spectators over the four-day
period of the event, including Great Britain’s Prime Minister David Cameron and
Prince Andrew.

The next WorldSkills Championships will be held in 2013
in Leipzig, Germany. 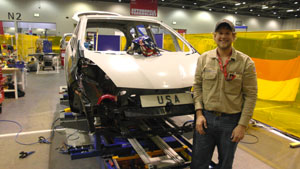