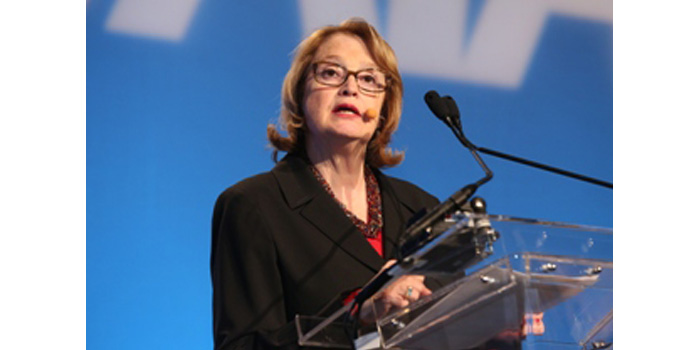 Kathleen Schmatz, president and CEO of the Auto Care Association, recently announced her plans to retire, effective Dec. 31, 2015. Schmatz joined the association in 2002, and was named president and CEO on Jan. 1, 2004 after 30 years with Babcox Media.

“It has been an honor to work with Kathleen Schmatz, a true industry icon and dynamic leader who has helped develop the Auto Care Association into the world-class organization it is today,” said Rick Jago, chairman, Auto Care Association Board of Directors. “The board is grateful for Kathleen’s outstanding leadership and countless contributions to the industry and association over the past 13 years.”

Major association accomplishments achieved during Schmatz’s tenure as president and CEO include:

“It has been my privilege to work for the Auto Care Association for these 13 years,” said Schmatz. “We have accomplished so much, and we couldn’t have done it without the guidance and support of our membership. I look forward to the continued success of the Auto Care Association, our wonderful members and our expert professional staff. The auto care industry is an inspiring place to work, and the hardworking people in it have inspired my efforts on their behalf every day.”

Schmatz is a nationally-recognized industry advocate and a sought-after speaker and presenter. She is frequently interviewed by the media, having appeared on the NBC Today Show, CNBC and in the New York Times. In 2012, Schmatz was honored with the Automotive Warehouse Distributors Association (AWDA) Automotive Leader of the Year award. In 2009, she received the Women Who Advance Excellence in Associations Award by the American Society of Association Executives (ASAE) and the Center for Association Leadership’s Greater Washington Network.

In 2007, Schmatz received an honorary doctor of laws, honoris causa, from Northwood University. In 2006, she was named to the prestigious Committee of 100 by the U.S. Chamber of Commerce, comprised of the leading association chief executives.

Schmatz is an officer of the University of the Aftermarket Foundation and a board member of the Coalition for Auto Repair Equality (CARE). She has served as an officer of the Auto International Association, the Automotive Communication Council and was founding president of the Car Care Council Women’s Board. She has also contributed as a curriculum advisor to Northwood University and as chair of the Auto Care Association Marketing and Communications Committee.

The association’s Executive Committee has selected a recruitment agency and will be spearheading the process to choose Schmatz’s successor. For more information, visit www.autocare.org or call (301) 654-6664.