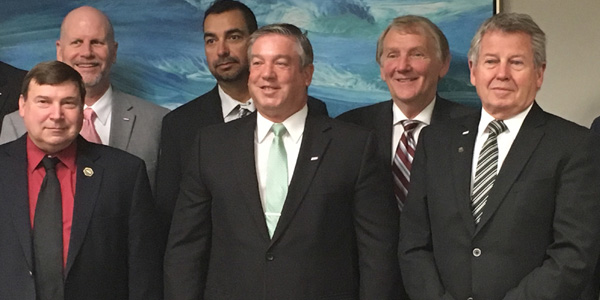 The three-day annual meeting opened with a welcome party for attendees and included open and closed board meetings, an affiliate directors’ conference, a recognition night and networking events.

The Automotive Service Association (ASA) swore in its new chairman and board members during its 2017 Annual Meeting in Denver.

The three-day annual meeting opened with a welcome party for attendees (sponsored by Federated Insurance) and included open and closed board meetings, an affiliate directors’ conference, a recognition night and networking events. Following the open board meeting, the new chairman and board members were sworn in for the 2017-2018 year.

New board members began their terms at the close of the annual business meeting.

Serving the first year of their two-year terms on the board are:

In addition, Bill Moss (EuroService Automotive, Warrenton, Va.) was reappointed to the board for a one-year term as secretary/treasurer.

Dan Risley, ASA president/executive director, also serves on the ASA Board of Directors in an ex-officio capacity.

“The annual meeting is always an exciting time of the year as it provides us an opportunity to recognize the efforts of our volunteers who tirelessly give back to the industry,” Risley said. “The meeting also helps set the stage for the remainder of the year, as we establish direction and priorities to advance ASA. We want to especially thank Federated Insurance, Advance Professional and AutoZone, which helped sponsor some of our networking events this year. Their presence and support is greatly appreciated.”

The recognition night, sponsored by Advance Professional, recognized the efforts and achievements of the ASA board and leadership, including the work of the Mechanical Division and Collision Division operations committees.

Scott Benavidez, director of the Collision Operations Committee, recognized April Hernandez with a Phoenix Award for her longtime service to ASA. The Phoenix Award recognizes an ASA Collision Division member for his or her contributions to the automotive service industry and is the highest award given to a collision member.

Bob Wills, director of the Mechanical Operations Committee, recognized Tom Piippo with an Alpha Award for his commitment and service to ASA’s Mechanical Division. The Alpha Award is the highest award given to a mechanical member.

The annual meeting concluded with a Colorado Rockies baseball game at Coors Field. Sponsor AutoZone hosted members and guests in a dedicated suite, where they enjoyed refreshments and networking while taking in the game.

Advertisement
In this article:collision repair