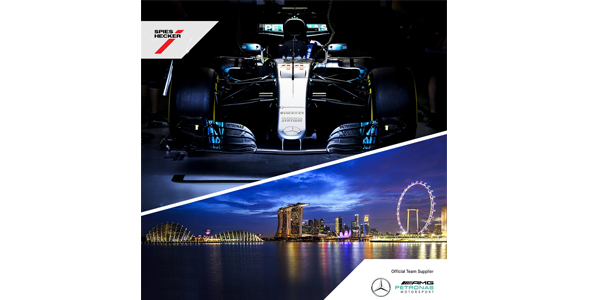 For Axalta, the relationship with Mercedes-AMG Petronas Motorsport is key to its decades-long strategic global partnership with motorsports.

Axalta Coating Systems announced that Lewis Hamilton, who drives a Silver Arrow for Mercedes-AMG Petronas Motorsport, of which Axalta is the Official Team Supplier, won his third consecutive race of the 2017 season at the 2017 Formula One Singapore Airlines Singapore Grand Prix. With the victory, Hamilton maintained his lead in the FIA Formula One World Drivers’ Championship and the team’s lead in the FIA Formula One World Constructors’ Championship.

Axalta Coating Systems is Official Team Supplier to Mercedes-AMG Petronas Motorsport. Spies Hecker, one of Axalta’s premium refinish paint brands, has been responsible for the paint on the high-impact, instantly-recognizable liveries of the team’s race cars for the past three years, including the cars of their three-time World Constructors’ Champions success.

For Axalta, the relationship with Mercedes-AMG Petronas Motorsport is key to its decades-long strategic global partnership with motorsports. Formula One in particular, as the leading global racing discipline, allows Axalta to demonstrate the extent of the coatings’ technology and durability in high-endurance, exceedingly demanding racing environments.

The 2017 Silver Arrows livery comprises 13 colors, none of which are commercially available: five shades of green, three shades of blue, four shades of graphite silver, and the main color named Stirling Silver after Sir Stirling Moss who drove for Mercedes in 1955. During the season, the team paints thousands of panels and components, as many as 150 in some weeks, so when speed and accuracy of application are required, the team relies on Spies Hecker to deliver.

I-CAR Debuts 2020 Year in Review
Connect with us