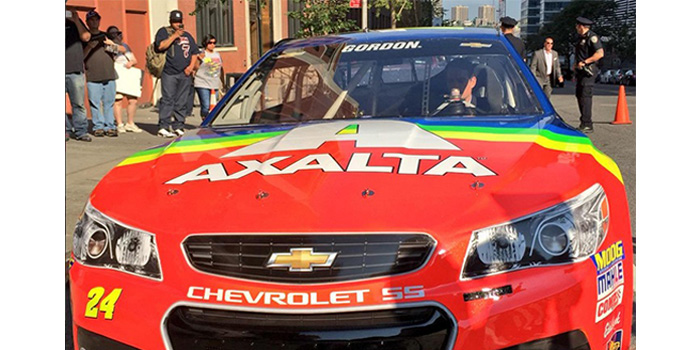 The rainbow paint scheme is set to appear on the No. 24 Axalta Chevrolet SS one last time under the lights at Bristol Motor Speedway on August 22, 2015 in Bristol, Tenn.

“This is an exciting time for us. We realize race fans have always celebrated and appreciated this paint scheme,” said Nigel Budden, Axalta vice president and head of its North American business. “We could not be more thrilled to see the rainbow paint scheme hit the track one more time under the lights in Thunder Valley. It will be a tribute to our long history with Jeff Gordon and the No. 24 Team at Hendrick Motorsports. We owe it to fans and our longtime customers who love the sport.”

Gordon has five wins at the famed half-mile track referred to as “The Last Great Coliseum.” Four of Gordon’s wins were in the rainbow paint scheme, designed by legendary motorsports artist Sam Bass.

“It’s cool this paint scheme will appear on the No. 24 Axalta Chevy SS one more time,” said Gordon. “Ever since it was announced this year was my final season, the fans have been vocal on social media wanting us to run it again. Thanks to Axalta for allowing that to happen.”