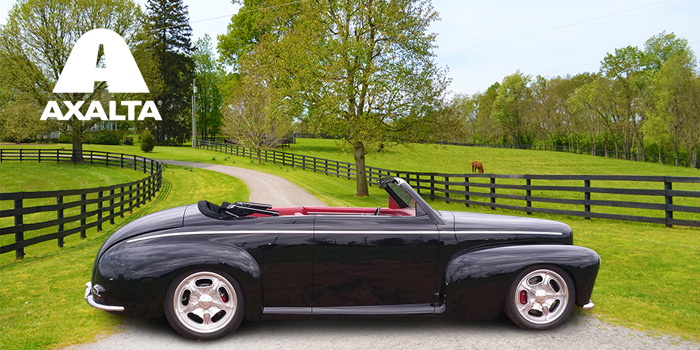 Axalta representatives will be at the 46th Annual NSRA Street Rod Nationals Plus to offer examples of automotive art that is created with its global refinish brands Cromax, Standox and Spies Hecker, as well as ChromaPremier Pro, Hut Hues custom finishes and Hot Hues line of custom colors.

Axalta Coating Systems announced it will be supporting the 46th Annual NSRA Street Rod Nationals Plus, to be held at the Kentucky Exposition Center in Louisville, Ky., August 6-9, along with 11 other custom car shows across the country this year. The five cars Axalta will be putting on display include:

Axalta representatives will be on hand to offer show attendees examples of automotive art that is created with the paint, including its global refinish brands Cromax, Standox and Spies Hecker, as well as the Hot Hues line of custom colors.

Axalta will also be promoting its 2015 Paint Outside the Can contest. The contest is an invitation to unleash creativity using any Axalta-branded coating system to paint and decorate an unused, standard one-gallon paint can. Auto body paint repair requires many skills – problem solving, troubleshooting, critical thinking and time management, to name a few. Axalta organized the contest to give its body shop customers an opportunity to use these skills in a fun, creative way and support their inner artists.

Submissions will be recognized and displayed via certain social media channels throughout the contest. At the end of the contest, which closes September 15, 2015, six “Celebrity Picks” will be selected by industry celebrities who will vote for their favorites based on creativity, execution and degree of difficulty. In addition, six “Fan Favorites” will be chosen by fans based on the number of photo “likes” that these favorites received on Axalta’s Instagram page. Finally, one “Best-in-Show” grand prize winner will be selected from the six “Celebrity Picks.” To learn more, visit the contest website.

Advertisement
In this article:axalta, Kentucky