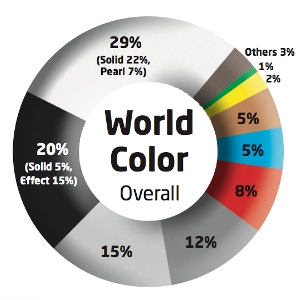 Axalta Coating Systems has released its annual Color Popularity Report. This year’s report includes "Say it with Color," Axalta’s forecast of four color megatrends for automotive designers around the world.

“Our customers count on our data every year to drive market decisions,” said David Fischer, vice president of Axalta’s global OEM business. “Our global team of color specialists relies on our advanced forecasting to formulate the next generation of coating colors. The result is an ever-evolving color palette for automotive designers. As the industry continues to evolve and strives to innovate for customers worldwide, Axalta is committed to partnering with our customers to provide the best possible coatings available.”

Produced since 1953, the report reflects the most popular colors for automobiles in 2013. White and white pearl came in as the global favorite, with nearly a 10 percent advantage over the next most popular color: black. Silver, gray and red took the next top spots across the globe.

The following is a breakdown of color popularity by region:

Other countries and regions