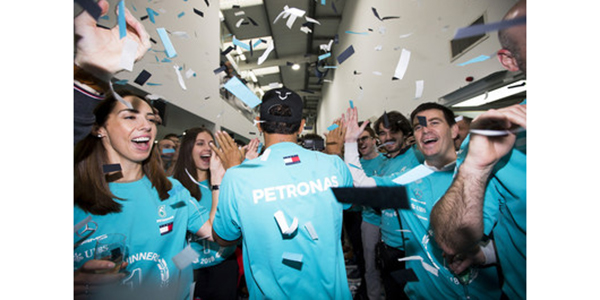 Axalta has congratulated Mercedes-AMG Petronas Motorsport on becoming the 2018 FIA Formula One World Constructors’ Champions, which was secured at the Brazilian Grand Prix on Nov. 11, 2018, in São Paulo.

This historic win follows driver Lewis Hamilton gaining his fifth FIA Formula One World Drivers’ Championship title, which he secured at the Mexico Grand Prix on Oct. 28, 2018. Hamilton is just the third driver in the sport’s history to become a five-time World Driver’s Champion, alongside legends Michael Schumacher and Juan Manuel Fangio. Each of Hamilton’s titles has been won with Mercedes-Benz power, and four of them at the wheel of a Silver Arrow.

“On behalf of Axalta, I would like to congratulate Mercedes-AMG Petronas Motorsport on its fifth consecutive FIA Formula One World Constructor’s Championship, and Lewis Hamilton on winning his fifth FIA Formula One World Drivers’ Championship,” said Robert Bryant, interim CEO of Axalta. “Both of these incredible achievements are the culmination of terrific teamwork and outstanding performance, values we share with Mercedes-AMG Petronas Motorsport. We’re happy to be part of creating a winning formula of technology and innovation with Spies Hecker’s lightweight and highly-efficient paint systems.”

Axalta has a long-lasting relationship with Mercedes-AMG Petronas Motorsport as Official Team Supplier. Axalta’s premium global refinish brand Spies Hecker has been responsible for the paint on the team’s Silver Arrows race cars, including this year’s Mercedes-AMG F1 W09 EQ Power+, for more than five years. Axalta works closely with the team’s Paint Shop in Brackley, UK, to ensure that the paintwork on the cars is light, durable and can withstand the extreme track conditions.