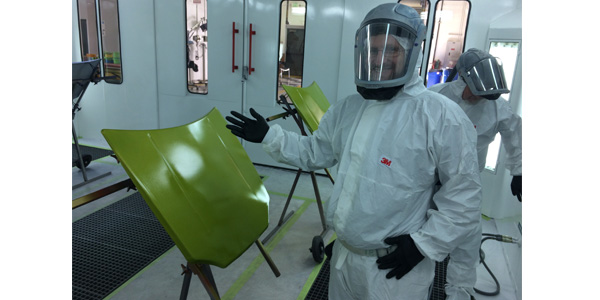 Journalists from BodyShop Business and other media outlets got to see how easy it is to produce a great paint job using an Axalta waterborne coating.

Painters are creatures of habit. So when vendors began encouraging U.S. body shops to use their waterborne products about a decade ago, many shops pushed back.

“Painters, for the most part, rebelled at first,” said Harry Christman, Cromax brand manager for Axalta Coating Systems. “Since they’d been spraying solvent for many years, and had developed great expertise at it, that rebellion was quite understandable. Any time there’s new technology, it’s bound to cause some pushback.”

However, as a group of automotive trade journalists learned during a Jan. 30 product demonstration at Axalta’s training facility in Pomona, Calif., waterborne paint is a perfectly viable alternative to traditional solvent-based products – especially for shops that need to comply with low-VOC mandates or reduce their cycle times.

The Los Angeles area was a natural setting to witness the virtues of waterborne coatings. In 2008, the Southern California Air Quality Management District (now known as the South Coast Air Quality Management District) was the first in the nation to mandate strict limits on the VOC content of basecoat and clearcoat finishes applied to vehicles, when it amended its Rule 1151. (Many shops remember that Rule 1151, which dates back to 1988, was the impetus for high-volume, low-pressure spray guns.) 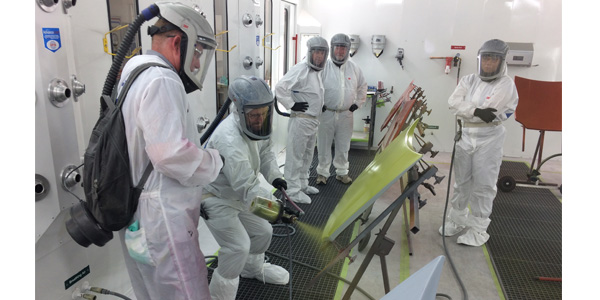 From the start, Axalta avoided a heavy-handed approach to selling its waterborne products in the United States, offering them as an option but reassuring shop owners that the company will continue to support their solvent-based needs as well. While many shops – especially in rural areas – still plan to stick with solvent-based coatings until they absolutely have to switch, overall there’s a lot less resistance to waterborne coatings today, Christman said.

“I’ve done some focus-group work and I don’t think you’ll find a body shop anywhere that won’t say they’ll be spraying waterborne one day,” he added.

For those that are making the shift to waterborne coatings, they’ll find that there’s no drop-off in quality, color match or durability. In fact, Christman noted, because waterborne paint has a thinner film, “it’s actually more chip-resistant than solvent.”

Today’s waterborne technology offers other advantages. As trade journalists saw firsthand, waterborne coatings are extremely forgiving, enabling someone who has never sprayed before to produce a great paint job the first time out of the gun. Donning full-body Tyvex suits, air-purifying respirators, protective goggles and nitrile gloves, journalists applied a waterborne basecoat and clearcoat to a riding-lawnmower-sized vehicle hood using the wet-on-wet process, and were able to achieve high-quality results in a fraction of the time it would’ve taken with a solvent-based product. 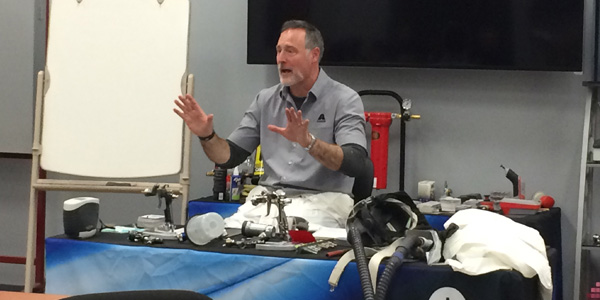 Axalta has conducted similar demonstrations at the SEMA Show, with the goal of showing customers how easy it is to paint with waterborne technology. Axalta touted these demonstrations as “WOW! Sessions,” a nod to the “wow” factor that comes with spraying the waterborne coatings. At the same time, the company wants to educate users on the differences between the waterborne and solvent-based painting processes.