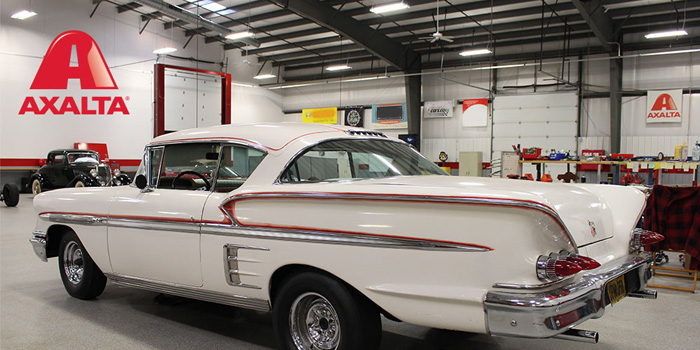 For TV host and former NASCAR champion crew chief Ray Evernham, the featured car in the movie, “American Graffiti,” is the holy grail of hot rods – a car that inspired his lifelong passion for cars, rock and roll and the American car culture. Now, after pursuing the car for most of his adult life and finally acquiring it, he faces an even bigger challenge – preserving it for the enjoyment of generations to come.

Evernham has partnered with Axalta Coating Systems to bring this piece of movie history and Americana back to life. The car will be unveiled in Axalta’s booth no. 22391 at the 2016 SEMA Show in Las Vegas, Nov. 1-4.

“When I was a teenager growing up in New Jersey, this car represented everything that was cool about America’s car culture – independence, coming of age, freedom, and enjoying your life with your buddies,” said Evernham. “This car has been on my dream list forever. To now own it and lead the preservation of this incredible piece of American history is truly an honor. To me, it’s like preserving the ‘Mona Lisa.’

“To save this car for future generations, we have to go back 42 years to its original movie condition. It really is a forensic preservation. We have to completely take it apart, catalog every piece and then repair those pieces. Every piece of chrome will be straightened and re-chromed. The emblems will be re-chromed as well. The nuts and bolts will be re-plated. The interior has been entirely disassembled, cleaned and will be reinstalled. Everything we took off is going back on the car. Even the rear tires are original.”

Using Axalta’s Cromax ChromaPremier, Evernham will also replace the paint and famous red striping on the vehicle to make it look exactly like it did in the movie.

“Paint technology has come a long way since 1958,” said Harry Christman, Axalta North American Cromax brand manager. “The paint scheme still represents the most recognizable aspect of this iconic car. Axalta’s goal with this restoration is to precisely match the original colors to preserve the vehicle’s heritage and protect this unique piece of history for years to come.”

Evernham added, “The paint was more than 40 years old and hadn’t been maintained. If it were left unprotected for much longer, the car would have just been bare metal. We digitized and made detailed templates of the striping for exact duplication and placement. Axalta was even able to recreate the exact paint colors, so we’ll return this car to the condition that moviegoers have seen for years.”

Following the debut, Evernham plans to show the car at a range of car shows across the country. The restoration will appear in an upcoming season of “AmeriCarna” on Velocity.