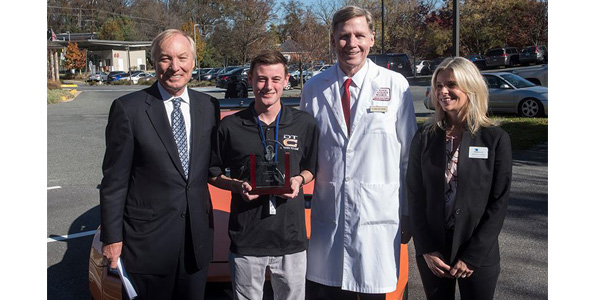 The award was presented on Nov. 17 at the National Institutes of Health in Washington, D.C..

Lee was diagnosed with a rare form of kidney cancer when he was 19. Now 21, he chose to fight his cancer and raise awareness of rare kidney cancers by creating the charity.

Lee has raised more than $400,000 and shared his story of hope to thousands with his Driven to Cure custom 2015 Nissan GT-R.

“We’re honored to support Andrew and Driven to Cure,” said Dan Bihlmeyer, BASF marketing director, Automotive Refinish. “His spirit and determination are an inspiration for all.”

BASF provided the custom DTC orange Glasurit paint with a pearl effect for the GT-R and has continued to support Lee and Driven to Cure at various events, including the October Cars & Fight Cancer event in Virginia and at the 2016 SEMA Show.

“Andrew was chosen because of his amazing passion and commitment to raise awareness and money to help find a cure for rare cancers,” said Peter Franchot, comptroller. “His dedication and bravery are inspirations to all Marylanders. The work he’s doing brings hope and improves the quality of life for people around the world.”

The award, established in 2012, honors the public service of Schaefer, a former Maryland mayor, governor and comptroller. The award is presented to Maryland residents in each of the 23 counties and the city of Baltimore who demonstrate an unwavering dedication to helping others.

Advertisement
In this article:Community Outreach, Driven to Cure, Maryland