New system designed to speed up flash and cure times of waterborne without contaminating the finish. 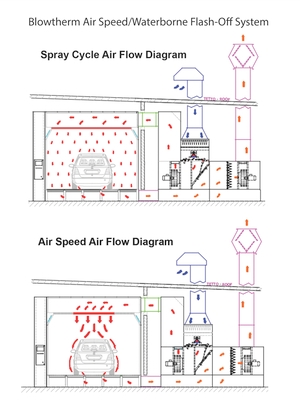 Blowtherm is inviting collision repairers to stop by Booth 11379 at the SEMA Show to check out its all-new Air Speed system designed to facilitate the use of waterborne finishes.

Air Speed increases the air velocity up to four times when compared with fan-type or nozzle systems, says the company. Blowtherm lists Air Speed’s advantages as:

Blowtherm (Spa) has been manufacturing quality products since 1956 and states that it is known around the world for “supplying quality systems using unsurpassed engineering technology to produce the most efficient, longlasting and technologically advanced products on the market today.”

One of the latest innovations came with the use of waterborne materials. As the automotive refinish coatings have changed, so has the performance requirements of spraybooths. The need for more airflow in the spray cycle and enhanced airflow required in the flash-off mode is necessary. Europe has been mandating the use of waterborne finishes since 2004, and Blowtherm says its engineering department has always been proactive to stay ahead of the refinish paint challenges.

This engineering philosophy led Blowtherm, along with several major paint companies, to develop the Air Speed Waterborne Flash-Off system, as ceiling fan and blower technology is more than two decades old.  Blowtherm claims that ceiling fan and blower systems were designed mainly for the curing of solvent materials, which it believes doesn’t completely address waterborne problems. Blowtherm claims that even though the older ceiling fan/blower technology does tend to disturb the air flow in the cabin, they’re known to contaminate the finish – resulting in more buffing.

Blowtherm says its Air Speed system tackles those issues by increasing the air speed over the entire vehicle, two to four times faster depending on the cabin and generating group size. The end result, the company claims, is faster flash and cure times without contaminating the finish.

Blowtherm states that the system does not require additional motors or wiring, making it basically maintenance-free. Plus, the company claims that there are no added energy costs associated as there are with older ceiling fans and blowers.