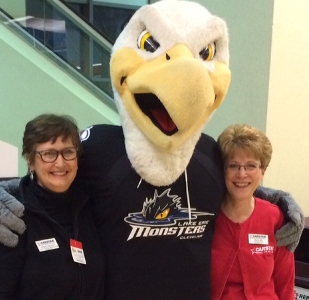 Baseball has the reputation of being America’s greatest pastime. The Super Bowl is the most-watched sporting event in the country, grabbing roughly 109 million viewers in 2014. And we can’t forget about the month of March, which is primarily occupied by NCAA fans closely stalking their brackets with dizzying enthusiasm.

But when we think sports, we often neglect that favorite of our neighbors to the north: hockey.

Of course, there are a few exceptions to this. Some cities in the U.S. have a larger hockey following than others – for example, Detroit. Home to the Red Wings, the city has the third-highest local fan base in the U.S. (after the Pittsburgh Penguins and the Buffalo Sabres). For this reason, Collex Collision Centers, a Detroit-based company that also has some locations in Florida, decided to partner with the team.

"We’ve helped out almost a million customers in Detroit in our 40 years, and almost all of them are Red Wings fans," said Nick Booras, vice president of sales and marketing. "And if you look at registered vehicles in the state, almost half the people that own one in the Detroit metro area are actual Red Wings fans."

The decision to partner with the Red Wings was an easy one based on one simple question: "What do the customers and employees like?" Though Collex has only been affiliated with the team for a little more than a year, it has seen the partnership pay off, garnering roughly 400 percent more impressions (or number of times someone sees your message, whether via your website, social media, TV, etc.) than they initially thought they would receive.

“This is very much a friendly, sports-driven town, and Collex offers the same kind of atmosphere that these fans are used to," said Booras. "It’s a lot of fun.”

Since Detroit is home to so many puckheads, Collex decided to offer one lucky fan the ultimate Red Wings experience through a random drawing. The winner and a few friends received free tickets to a game, as well as a chance to ride on the Zamboni and meet the players.

“What’s very interesting is that [the winner] had no idea who Collex was. The good news is she’s never gotten in an accident,” said Booras. "The life cycle of our business customer is what it is – most of these people aren’t going to recognize the brand unless it’s affiliated with another industry leader that they see day in or day out, or at least season to season. Hopefully, we never see her as a customer, but if we do, [the contest] will have probably played a role in it.”

A Monster Deal
But it’s not just shops based in hockey-centric cities that are seeing the benefits of partnering with their hometown teams. Despite the fact that the Cleveland, Ohio, group of CARSTAR stores sits in a market filled with avid Cleveland Browns and Indians fans, it decided to partner with the local Lake Erie Monsters hockey team instead.

Kerry Ott, marketing manager for the Cleveland-based CARSTAR stores, says that the initial draw to partnering with the Monsters was the low cost. A $16,000 investment, which also included an affiliation with a local minor league football team, has allowed the company to offer frequent ticket giveaways, as well as talk to prospective customers face-to-face at the games.

“We did something called Live Marketing Night four times last year where the CARSTAR sales team went to hockey games and set up a table to give away CARSTAR-related marketing items and talk about our body shop business to people attending the games,” she said. “We found it to be very beneficial.”

A big bonus of CARSTAR’s affiliation with the Monsters is the ability to give back to the people who matter most: customers and employees. Both of these groups, as well as CARSTAR’s insurance partners, have received hundreds of tickets. On occasion, CARSTAR has even been able to give away some tickets to local youth groups.

“It’s all about the continuing recognition of the brand,” she said. “You have to keep that name in front of [people] because they won’t need a body shop until they have an accident.”

Ott says the added visibility the partnership has brought has definitely led to a big return on investment (ROI). In fact, one of the Monsters’ players chose CARSTAR to have his car repaired after he got in a fender bender.

“That was a direct correlation to our ROI,” said Ott.

What the Devil?
Like CARSTAR, H&V Collision, a multi-shop operation based in the Albany, N.Y., area, has an affiliation with an American Hockey League team –  the Albany Devils – that has also proved fruitful. And it, too, has had players and staff come into the shop to have their cars fixed. The company has been partners with the Devils for roughly three years, but their rationale for joining forces with the team wasn’t just for tickets and player referrals.

“Hockey season is in the winter, and our business is usually busiest around that time,” said Vartan Jerian Jr., vice president. “[Devils’ games] attract a lot of families, so we thought that would be a good avenue to approach it versus any other type of sport in the area.”

One of the biggest outcomes from H&V’s affiliation with the Devils was a huge event that was co-hosted with GEICO. Last year, the collision center teamed up with the insurer to donate three vehicles to military veterans during the Devils’ Veteran’s Evening event.

“Any time they can support us or we can support them at a charitable event, we try to do that for each other,” Jerian said.

Another benefit of partnering with the Devils has been networking – what Jerian believes is the biggest benefit of sponsorship.

“There are other people and sponsors affiliated with the team, so you gain some business and personal relationships. Plus, you have the ability to get yourself out in front of thousands of people as well."

Overtime
Collex, CARSTAR and H&V all plan on continuing their partnerships with their hometown icers.

“I think year after year, [the Red Wings] will continue to be a very good partner as long as they continue to stand for the same things they’ve stood for in the past,” said Booras.

Added Jerian, “It’s a great partnership. The team itself is aligned with our company goals as far as being involved in the community and helping the less fortunate. To find an organization that’s aligned with that and wants to jump in on that with you is a great and rare opportunity.”