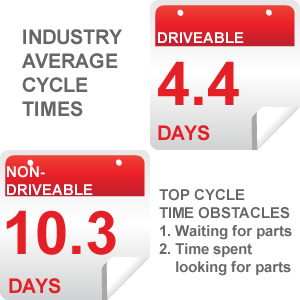 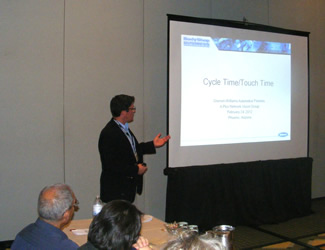 Cycle time is quickly becoming one of the most important metrics by which a collision repair facility can measure itself against its competitors. Also, insurers are putting a heavier emphasis on this Key Performance Indicator to determine who gets the lion’s share of their work. That’s why it was the focus of discussion at the Sherwin-Williams Vision Group meeting Feb. 24 in Phoenix, Ariz.

BodyShop Business Editor Jason Stahl presented the findings of a cycle time survey the magazine conducted to the group, pointing out the average cycle time respondents turned in and what the industry perceives as obstacles to improving it.

Nearly 300 repairers responded to the survey. Approximately 68 percent defined themselves as independent single-store owners. Seventy-one percent had at least one DRP, 43 percent had up to 10 repair orders per week, and 41 percent had an average repair order of $2,000 to $2,500.

Respondents said the No. 1 obstacle to improving cycle time was “waiting for parts.” The No. 2-ranked obstacle was “time looking for parts.” Some other obstacles listed were:

Respondents said their average touch time (defined as the average time a technician actually "touches" the vehicle during an 8-hour day producing labor hours) was 4.8 hours per 8-hour day. The No. 1 obstacle to improving touch time was “work processes,” followed by:

Some other obstacles to improving touch time listed were: