The award has been given out by BodyShop Business since 1984 to a true collision
repair visionary who has experienced great success by being forward-thinking,
overcoming challenges and persevering.

LeVasseur’s collision career began in 1976, when his high
school consumer electronics teacher offered him a job at his father’s auto body
supply store. He then enrolled at Thaddeus Stevens School of Technology and
worked at a small body shop, honing his skills in the trade.

In 1980, LeVasseur joined a multi-franchise dealership
and spent the next 13 years as a technician and body shop manager. In 1993, he met Don Keenan and shortly thereafter opened
the first expansion shop of Keenan Auto Body. In 2001, he was promoted to
partner and assumed the role of executive vice president and chief operating
officer. He currently operates 11 facilities with total sales of more than $19
million.

Beyond growing Keenan Auto Body’s bottom line, LeVasseur,
his staff and their families have contributed to their community by hosting an
annual charity golf outing, raising more than $200,000 for Big Brothers/Big
Sisters, Camp Mak-A-Dream, Children and Youth Services, Make-A-Wish Foundation
and the Philadelphia Ronald McDonald House.

LeVasseur has also spearheaded green initiatives within
Keenan Auto Body by converting to waterborne/low-VOC paints, installing solar
panels at one of the facilities and continuing to research other viable options
at the other shops to minimize their impact on the environment.

LeVasseur is also deeply involved in the industry outside
of the shop, serving on numerous vo-tech advisory boards and organizations such
as NABC, CIC, ASA and others.

"Through his growing Keenan Auto Body into a
powerhouse in the collision repair industry, his involvement in the community
and the industry, and his care for the environment, Mike proved himself to be a
very deserving winner of this year’s award," said BSB Publisher Scott
Shriber. "BodyShop Business enjoys providing recognition for those
collision industry leaders who go above and beyond the call of duty when it
comes to advancing our industry." 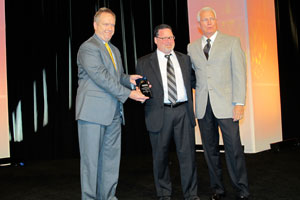