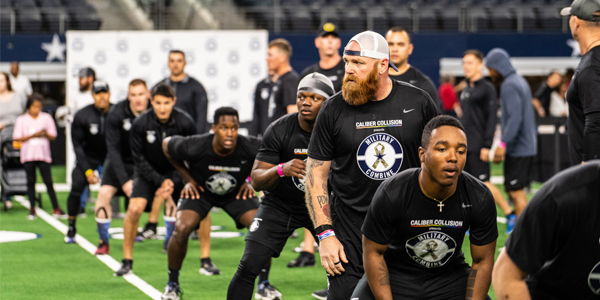 The goal of the Military Combine is to honor military heroes, showcase their athleticism and resilience, provide job opportunities and engage the community in a special military appreciation event. The service member athletes competed in six of the same drills that college athletes in the NFL Combine go through. In addition, 17 corporations and the Dallas Police Department attended with the goal of recruiting service members transitioning out of the military.

“As the nation’s largest collision repair company, Caliber Collision is committed to restoring the rhythm of your life,” said Mark Sanders, president and COO of Caliber Collision. “Honoring active military and veterans is one of the many ways we deliver on our purpose across the communities we serve. Giving service members an opportunity to participate in an event like this not only boosts their spirit of competition, it also offers them a number of different opportunities from deployment to employment through the programs that Caliber Collision and the Dallas Cowboys support.”

Twenty-nine nonprofit military support organizations participated in the combine and provided a wide range of best-in-class resources for veterans and active-duty service members across the region and the U.S.

A highlight of this year’s event was the presentation of three vehicles donated by USAA and restored by North Texas Caliber Collision shops to three veterans as part of the National Auto Body Council’s Recycled Rides program.