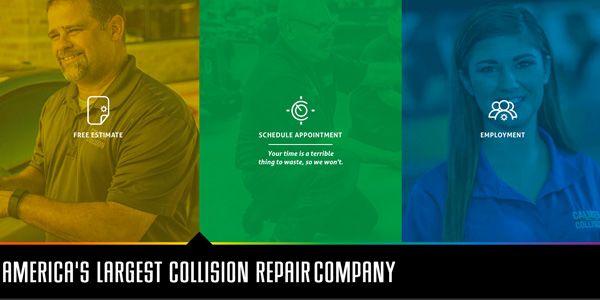 Designed and developed by the ad agency Johnson & Sekin of Dallas, Caliber’s website was selected from among 13,000 entries submitted from all 50 states and more than 70 countries.

The Caliber Collision website has been named an official honoree in the Professional Services category of the 21st Annual Webby Awards.

The award is recognized internationally as the Internet’s highest honor and most respected symbol of success.

Designed and developed by the ad agency Johnson & Sekin of Dallas, Caliber’s website was selected from among 13,000 entries submitted from all 50 states and more than 70 countries.

The recognition ranks Caliber’s site in the top 17 percent of all work entered this year from around the world, according to the International Academy of Digital Arts & Sciences, which established the Webby Awards program in 1996.

“We are extremely proud to be among the elite companies worldwide honored with this prestigious award of excellence,” said Steve Grimshaw, president and CEO of Caliber Collision. “As the nation’s largest provider of collision repair services, our website is a reflection of Caliber’s commitment to ongoing innovation, leading-edge technology and high standards of customer service that drives us in our goal to be the collision repair center of choice in every community we serve.”

The Webby Award winners are judged by the 2,000 worldwide members of the International Academy of Digital Arts & Sciences.

Caliber Collision is in good company. Other organizations honored as part of this year’s Webby Awards include Google, BBC, National Geographic, HBO, ESPN, the New York Times, Airbnb, Intel and the Onion.

Advertisement
In this article:marketing, MSOs

What's in Store for the Collision Industry in 2020?
Connect with us