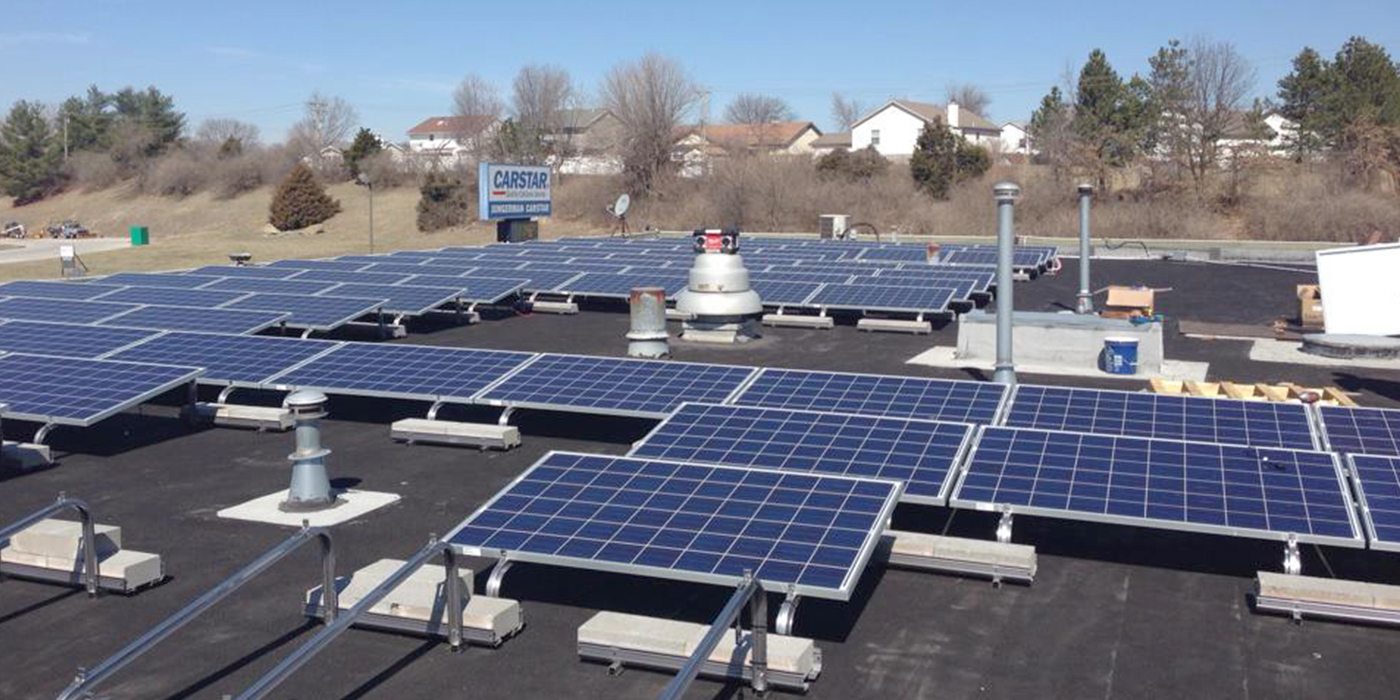 With an upfront investment of about $86,000 six years ago, CARSTAR Jungerman began seeing their decision pay off with every electric bill they’ve received since installation.

On a trip to Europe with his wife, second generation CARSTAR Jungerman owner Kerry Woodson was inspired to “go green” upon his return.

“When we were in Germany and Austria, one of the things we noticed was the mass number of solar fields and solar panels on everything. We talked to a lot of people who were around, and they said, ‘Yeah, everybody’s moving to this over here and we’re really trying to push the whole country to be green,’” Woodson said. “I thought it was an amazing concept.”

Upon his return to the U.S., Woodson began researching how he could convert his business to solar power.

“When we got back, I researched it and found a company who was doing it here in St. Louis and they had actually just gotten done doing the stadium where the Cardinals play,” Woodson said. “I talked with them and at the time, there were a lot of government incentives that helped to offset about 50% of the costs to be an early adopter. So, I said, let’s do it. Let’s make this happen. I think this is what we need to be doing to help the environment and help the future.”

With an upfront investment of about $86,000 six years ago, CARSTAR Jungerman began seeing their decision pay off with every electric bill they’ve received since installation. The shop averages a 60% savings in their electric bill from the solar panels that even withstand harsh weather conditions and produce power from the moon at night.

“We started seeing return on the very first panel that was in place,” Woodson said. “We saw our electric bill drop. It’s been six years now since we’ve installed it and we are on the positive side of that curve. We’ve made the money back we’ve invested. They said it would take between three and five years to see a return, and I would say it took about four to get the investment fully back.”

“After the panels were installed, the solar company went through and did an energy evaluation of our whole building,” Woodson said. “We swapped over all the lighting in the shop to LEDs and then put extra insulation inside the building to help control the heating and cooling.”

Along with becoming energy efficient, the body shop was the first in the area to use waterborne paint.

“We were the first shop in St. Louis to use waterborne paint,” Woodson said. “I’m real big into doing whatever I can to help in the environment and make sure people are safe. Being around the industry as long as my father and I have, I’ve seen the good and the bad of what has happened to a lot of his friends and colleagues who were not taken care of for a multitude of reasons. Seeing guys who are in their fifties and sixties with poor health because they didn’t use the proper safety equipment and they didn’t have water-based paint and different things like that. So, one of my goals is not to have those kinds of issues for the people that work for me or for myself.”

CARSTAR Jungerman shares its carbon footprint with customers to let them know how much of a global impact they make when they choose to get their car repaired at a “green” shop.

“We do a couple things differently that makes us stand out. We are the only shop in St. Louis to be solar-powered, and by being a CARSTAR member, we also receive the benefits that it brings, including national branding and a national warranty.

“CARSTAR helped give us guidance on environmental lighting, hazardous waste and helped us take steps to become a paperless office,” Woodson explained. “All of our customers have digital files now. Everything gets scanned in. All of our technicians have computer screens in the shop so they can do their work orders digitally. We would love to be completely paperless, but the amount of paper has dramatically reduced.”

With green changes happening throughout the shop, Woodson and his management took steps to make sure employees were trained on how to adapt to the new working environment.

“Just like anything, change is always hard for people. But after about 30 days of it and training employees, they like it a lot more because they have quicker access to everything,” Woodson said. “Especially searching OEM procedures; they have everything at their fingertips without having to wait for an estimator and appraiser or production manager to get them information. They can just click and point and they get right to the procedures. There’s 100% transparency.

“I would say that the biggest thing when making changes, whether it’s changing your distributors or your products, is getting your people’s involvement, working with them and not forcing the change; that’s been a huge way that CARSTAR helped by training us on how to implement change and not just force change on employees.”

And without hesitation, Woodson recommends that other shops consider becoming energy efficient too.

“It’s definitely good for the environment,” Woodson added. “Utility prices keep rising, and we don’t know what the future’s going to hold for us. The more we can do to sustain ourselves with solar power and new processes, the better off our businesses are going to be.

“It is an investment. But much like anything else you invest in, whether it’s a paint booth or a frame machine, you’re going to see a return on it. And you may actually see the return faster than you do on some of the equipment in the shop!”