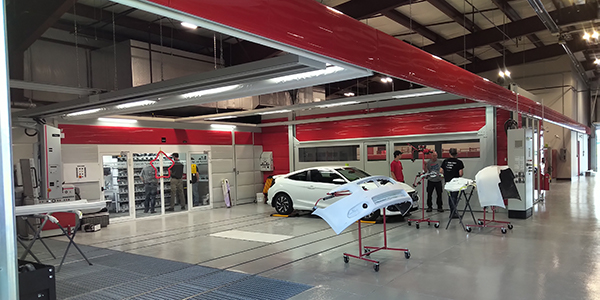 “When you make a deal with Symach, you’re not just buying body shop equipment – you are buying an entirely different business model,” said Steve Knox, general manager of CARSTAR Fredericton.

CARSTAR Fredericton operates two locations and is owned by Roy Kennedy. Since installing the Symach equipment at their new location in July, Knox said they’ve already experienced more efficiency at the repair facility.

“One of the biggest benefits is time,” said Knox. “A conventional shop might schedule two-and-a-half to three days to complete a 10- to 11-hour job. With Symach equipment, that same vehicle can now be repaired by lunchtime the day it’s dropped off.”

Knox said every step of the repair process is accelerated. “It’s not through harder work or more labor-intensive ways of doing things, but through the smart use of their equipment.”

The CARSTAR Fredericton team has been especially impressed with Symach’s Spraytron paint booth, which helps pull everything through the paint booth rather than having everything pushed toward the booth.

“The SprayTron is one of the industry’s newest generations of spraybooths on the market,” said Bergaglio. “It is high-performing, automated and it is built with the best burner, the best fans and the best material available. It can work as a conventional spraybooth using hot air from the burner or with radiant waves using a robot and will typically produce 8-10 paint cycles per day.”

Sean Donohue Back as Publisher of BodyShop Business
Connect with us