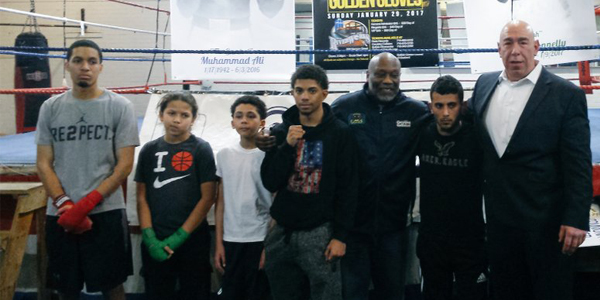 “It has been my privilege to support these young athletes who have trained so hard to compete in this American sports tradition,” said Carubba Collision Corp. President and CEO Joe Carubba.

The Carubba Collision New York State Golden Gloves Boxing announced at a recent news conference in Buffalo the 2017 kickoff of one of the nation’s greatest amateur events in all sports.

“This is going to be a very exciting year for amateur boxing in Buffalo” said Don Patterson, president of the New York State Golden Gloves. ”We have a tremendous slate of boxing that we want to officially announce to all the many boxing fans in Western New York and across the state.”

Several of the competing boxers were on hand and sparring at the news conference. Over 30 boxing clubs throughout the state from the Adirondack Region (Albany, Schenectady) and Niagara District Association Local Boxing Committees (LBC) to the Southtowns (Salamanca, Jamestown, Dunkirk), Syracuse, Jamestown, Niagara Falls, Geneva, Corning and Elmira have entered.

More than 200 pugilists will participate over the course of the tournament. Carubba Collision of Buffalo has been the presenting sponsor of the New York State Golden Gloves for the past 11 years.

“It has been my privilege to support these young athletes who have trained so hard to compete in this American sports tradition,” said Carubba Collision Corp. President and CEO Joe Carubba.

Carubba Collision has served the greater Buffalo area since 1955. Giving back to the community is something that Carubba Collision has a long and proud history of. Several not-for-profits have benefited from the generosity of Carubba Collision over the years, including Make A Wish, Young Life, Mercy Flight, ECMC Trauma Unit, YMCA, the Food Bank of WNY, the Niagara County Sheriffs K-9 Unit, the City Mission, the NYS Golden Gloves, SPCA and the University at Buffalo.