By BodyShop Business Staff Writers
May 6, 2014 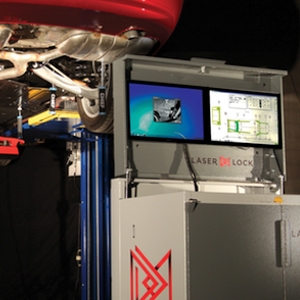 Chief Automotive Technologies has launched its new LaserLock live mapping system. Featuring a portable laser scanner with out-of-level measuring capabilities that can be used for blueprinting throughout the shop, the LaserLock frees up the frame rack to be used exclusively for repairs.

“When you measure every vehicle up front instead of just conducting a visual inspection, you reduce the chance that ‘hidden’ damage will crop up and delay the repair,” said Bob Holland, Chief director of collision in North and South America. “Hidden damage can lead to supplemental estimates, lost time waiting for additional parts and unhappy customers. LaserLock’s design allows it to be easily moved between the estimating bay and frame rack, leading to better estimates and quicker repairs.”

In addition to the laser scanner, LaserLock includes 45 targets with a range of attachments, dual flat screen monitors, a computer, color printer and Chief software. An aluminum collet kit is available for use with aluminum vehicles like the 2015 Ford F-150 pickup. The system is contained within its own rolling cabinet so it can be moved throughout the shop without having to be dismantled or loaded onto a cart. An optional tripod is available for raising the scanner to measure a vehicle mounted on a two-post lift. To accommodate any bay layout, the scanner connects to the rolling workstation with a 20-foot cable.

The LaserLock scanner can map the entire vehicle at once, reducing the time it takes to compile data for an estimate on vehicles with both front and rear damage, or diamond and twist damage. Once the vehicle is measured, estimators can print full-color maps of all the collision damage on a vehicle to create a thorough estimate.

LaserLock’s main flat-screen monitor is dedicated to the live mapping system, while the secondary monitor can be easily switched between an estimating program and OEM repair procedures.

“With LaserLock, a shop operator who wants to start blueprinting doesn’t have to dedicate a frame rack to measuring or even purchase a second measuring system for the estimator,” said Holland. “The estimator can wheel the system over to a two-post lift, which is the most cost-effective way to get most vehicles in the air. When the estimate is complete, LaserLock can be wheeled back to the repair bay and set up for frame rack use in less than five minutes.”

During the repair process, technicians can use LaserLock to monitor dimensional changes in real time, which Chief says saves time by eliminating the need to recalibrate after every pull and reduces the risk that a pull will put more damage into the vehicle. After the repair is completed, LaserLock can be used to create a final inspection report that shows the vehicle has been returned to OEM specifications.