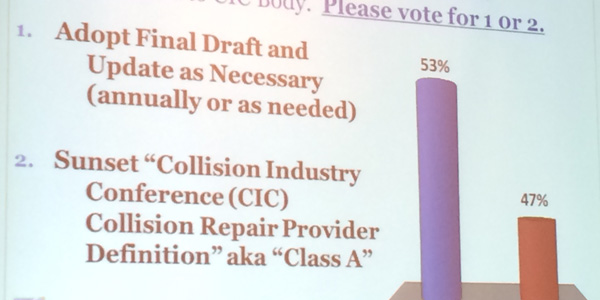 After much discussion, members of the Collision Industry Conference (CIC) voted to adopt an updated definition of “Class A” collision repairer during the CIC April meeting in Pittsburgh.

After much discussion, members of the Collision Industry Conference (CIC) voted to adopt an updated definition of “Class A” collision repairer during the CIC April meeting in Pittsburgh.

“We’ve arrived at the place where the body needs to decide if we want to continue with a definition for a collision provider as you have in front of you, or do we want to sunset it,” committee Co-Chair Chris Evans, a State Farm claim consultant, said prior to the vote. “The committee does not feel strongly one way or another. The wisdom of this body is what drives the decisions and where we end.”

The CIC’s ongoing effort to define the requirements of a collision repairer, which dates back to the 1980s, sparked a lively discussion at the Sheraton Station Square. 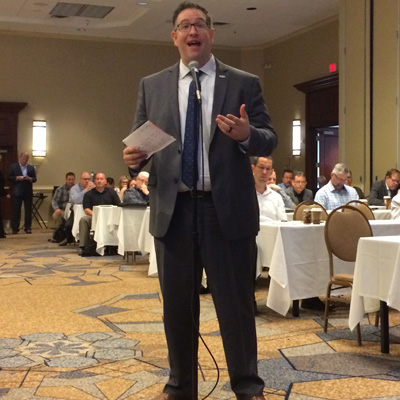 Aaron Schulenburg, executive director of the Society of Collision Repair Specialists: “The objective here is to define terms used in collision repair, and this feels more like a definition of an ideal rather than a term.”

While attendees praised Evans, Co-Chair Barry Dorn and others for their work on the document, several members insisted that trying to define “collision repairer” is outside the scope of the CIC’s mission.

“The objective here is to define terms used in collision repair, and this feels more like a definition of an ideal rather than a term,” Aaron Schulenburg, executive director of the Society of Collision Repair Specialists (SCRS), asserted. “ … This defines or attempts to define maybe what we want to see out of [a collision repairer], but that ideal may be different for those on the committee versus those in the room versus those in the industry versus those who create the vehicles.”

Schulenburg added that SCRS members “encouraged us to vote in opposition of passing it as a definition.” 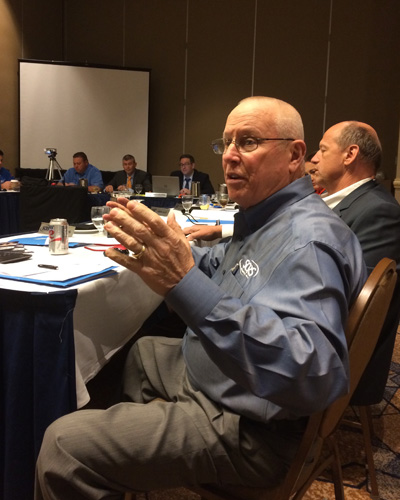 CIC Administrator Jeff Hendler: When insurance carriers used the Class A requirements as the criteria for their DRPs, “it got to be kind of a joke.”

Part of the initial impetus for the Class A requirements was to help insurance carriers determine which shops to include in their DRP programs. But “it got to be kind of a joke,” Hendler added, because the CIC has no legislative or legal authority, and therefore no means to ensure that shops claiming to be “Class A” facilities were complying with the requirements.

“It got to the point where I called a couple insurance companies and said, ‘You know what guys, this ain’t working for you, even though you think it is,’” Hendler said.

Jordan Hendler, executive director of the Washington Metropolitan Auto Body Association, noted that her association’s members have been “very vocal” that the CIC no longer needs the Class A definition, as there are other ways for body shops to differentiate themselves – such as earning OEM certification or attaining I-CAR Gold Class status.

“I also would say that CIC does not need to have work products to have productive and meaningful conversations about what definitions are in the repair field or what is necessary to be a good and proper repairer,” she added.

Steve Regan, former executive director of the Massachusetts Auto Body Association, pointed out that the association once used the Class A definition to help write legislation that proposed minimum standards for collision repair facilities in Massachusetts.

“Whether you keep it or not is up to the body, but it did have some value to us as an association in trying to improve the quality of the shops that existed in the state,” Regan said. “Other associations may be able to do the same thing.” 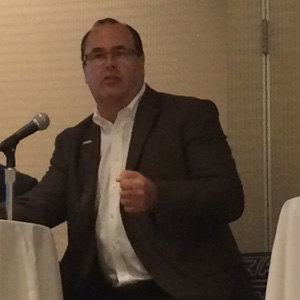 Scott Biggs, CEO of Assured Performance Network: “There were more recounts for this thing than there were in the last presidential election.”

In 2015, the Definitions Committee began the process of updating the Class A requirements to reflect the emerging technologies and other changes affecting the collision repair industry. The committee was considering segmenting Class A shops into three categories: cosmetic/non-structural; structural; and advanced, according to Evans. However, the committee pulled back from that when CIC members said segmentation was “too aggressive of a step,” Evans explained.

Evans thanked Aaron Clark and Scott Biggs of the Assured Performance Network for being among those who “jumped on board” to help finalize the “Collision Industry Conference Collision Repair Provider Definition” that CIC members adopted April 20 in Pittsburgh.

Even so, Clark agreed with others who contended that the definition is outside the scope of the CIC’s mission, because as vehicle technology and repair requirements continue to change at a rapid clip, “we’re not able to verify [the definition] and we’re not able to keep it updated consistently.”

Biggs, CEO of Assured Performance, asserted that, at the very least, the document “is a working, functional definition.”

“It was whipped and reconstituted and flushed and voted on how many times,” Biggs said. “There were more recounts for this thing than there were in the last presidential election.”

Biggs reminded attendees that the CIC “doesn’t have any authority over anybody.”

“So if you vote for it, vote against it, it doesn’t matter,” Biggs said. “It’s now out in the world. It’s kind of like what you accidentally left on the Internet – it’s out there and it will be used however somebody chooses to use it. Hopefully it’s useful to somebody in some form.”