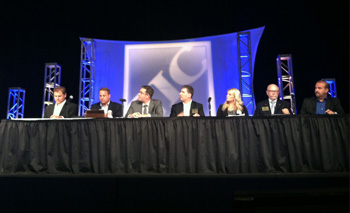 The Society of Collision Repair Specialists (SCRS) first took up the conversation months ago when many members complained that formulas used by insurers to determine average number of rentals days often led to unrealistic expectations. SCRS thought it logical to transfer the discussion to the CIC committee and pair it with a third-party study on the topic.

Out of data mined from the CSI of 8,000 shops, the findings were:

When asked whether rental coverage was extended by the insurer when the shop determined the car would not be delivered by the formula-derived promise date, repairers said “sometimes” and “sometimes not.” It was the “sometimes not” replies that brought the rental issue to the attention of SCRS.

“Members brought this concern to us from Connecticut, Montana, Hawaii, Texas and Maryland where there were instances where you had carriers setting hard-and-fast formulas,” said Aaron Schulenburg, executive director of SCRS. “And when those times weren’t being met, the carriers came back to the shop and said, ‘You didn’t hit this time limit and these are the days you’re responsible for paying for that rental. But the shop didn’t sell that rental coverage policy or didn’t profit from the sale of that policy. They’re doing the repair, and there are things that come up in the process. There are numbers we can look at, but there’s a lot of flux in the system and lots of things that influence how long that repair could or should take.

“We talked to one carrier regarding one of their formulas and how it fell outside of industry averages, and they knew that. They said, ‘Yeah, we understand, but we need to set higher expectations because our insurer competitors are also setting higher expectations.’ And I think there needs to be some point where we as an industry reconcile what we’re doing with the estimated average length of rental. Because, as a consumer, if we tell them it will be five days and it will really be 15 and we can do a better job of knowing that up front, we can do a better job of giving them a better experience. A longer repair is not going to make it a worse experience, but thinking it will be shorter and then it ends up being longer will make for a worse experience.”