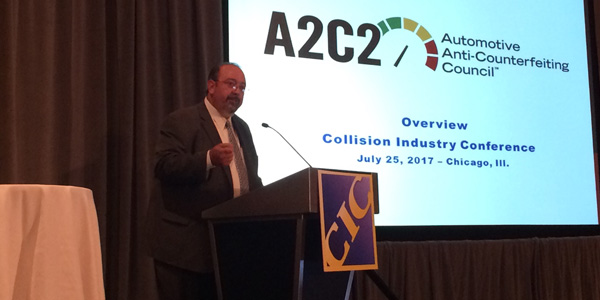 In May, Vitaliy Fedorchuk of Antelope, Calif., pleaded guilty to five counts of mail fraud for selling counterfeit airbags on eBay and other websites. Fedorchuk, who is scheduled for sentencing in October, faces up to 20 years in prison and a $250,000 fine for each count.

While it isn’t the kind of crime story that makes national headlines, the bust is a big deal to the members of the Automotive Anti-Counterfeiting Council (A2C2), who played a key role in bringing the scofflaw to justice.

Since their first meeting in 2014, members of A2C2 have been working with the U.S. Department of Homeland Security to crack down on sales of counterfeit airbags and other automotive parts. Membership in the nonprofit group has grown to 11 automakers, which collectively produce around 90 percent of the vehicles on the road in the United States.

“When you contact A2C2 with a counterfeiting concern, you are contacting the entire North American auto industry, and you bring the resources of that industry to bear against counterfeiting,” said A2C2 President Andy Forsythe of Nissan. “ … If you call one of us, you get all of us.”

During a presentation at the July 25 Collision Industry Conference in Chicago, Forsythe and other A2C2 members emphasized that the members of the council are united by a common cause: protecting their brands and protecting the health and safety of consumers.

“A2C2 is about counterfeit OEM parts: parts that bear our trademarks but were not manufactured under our authority or to our specifications, that are typically packaged in our packaging,” said A2C2 member Larry Benitz of Fiat Chrysler. “They are not regulated or tested, and they pose a potential risk to the American public.”

In just a few years’ time, A2C2 has notched some big wins. In addition to helping bring individual counterfeiters to justice, the group convinced e-commerce giants Amazon and Alibaba to prohibit airbag sales on their websites, and has “an ongoing dialogue with eBay” about the issue, Benitz said.

With the help of the group’s federal liaison – Jon Ruttencutter, a special agent with Homeland Security Investigations – the council met face to face with Daniel Marti, the former U.S. intellectual property enforcement coordinator. After a three-hour meeting with Marti in 2016, the council convinced him to include parts counterfeiting in the U.S. Joint Strategic Plan on Intellectual Property Enforcement for FY 2017-2019.

A2C2 also has conducted a number of training sessions with U.S. Customs and Border Protection officers to help them identify shipments of counterfeit auto parts. A2C2 member Joe Cammiso of Toyota said the brand-agnostic training sessions are designed to teach them what shipments of genuine OEM parts should look like. The council’s trainers urge customs and border inspectors to call any A2C2 member if they spot a suspicious shipment, regardless of the brand.

A2C2 is working on a number of fronts, including raising awareness of the dangers of using counterfeit automotive parts. Although airbags have been a major focus of the group’s work, Forsythe noted that “there’s virtually no part of an automobile that can’t be counterfeited and that isn’t currently counterfeited.”

“Brakes, filters, suspension, keyfobs, you name it: If we encounter it, we go after it, we do everything we can to investigate it and work with our law enforcement friends and collectively as a group to stop it,” Forsythe said. “ … Every component in your car is a potential risk if it fails.”

Although education and awareness are important elements of the council’s strategy, Cammiso admitted that “catching a bad guy” gives A2C2 members the most satisfaction.

In the arrest of Fedorchuk, six A2C2 members helped build the case by conducting test buys, validating that the airbags were counterfeit and providing affidavits confirming their findings. And in a scene right out of “Law and Order,” several of the OEMs accompanied law enforcement officials when they executed a search warrant at Fedorchuk’s home.

In Fedorchuk’s backyard, they found a shipping container with 1,200 airbag components.

“Somebody calls [him] up and says, ‘I want an airbag for a 2007 Camry,’” Cammiso explained. “He just reaches on the shelf and takes the cover for a 2007 Camry, pulls an inflator, pulls a bag, gets a case, cobbles it all together – we call it a ‘Frankenstein unit’ – and sends it out to the customer.”

“It’s hard to refute [the charges] when you have a book of evidence signed by six automakers saying that this product is counterfeit,” Cammiso said. “He had nowhere to go.”

Ruttencutter estimated that up to 90 percent of counterfeit auto parts come from China. Working with Homeland Security Investigations, A2C2 has made some inroads with the Chinese government, convincing the government to prosecute several people for manufacturing counterfeit airbags.

“Being in law enforcement and working with China for many years, for [the Chinese government] to take action in China and arrest Chinese nationals is basically unheard of,” Ruttencutter said. “The reason why is the understanding that counterfeit auto parts can hurt their consumers as well.”

Of all the counterfeit airbags that A2C2 has tested, none have functioned properly, according to Forsythe. Even a genuine OEM airbag with a counterfeit cover can be dangerous.