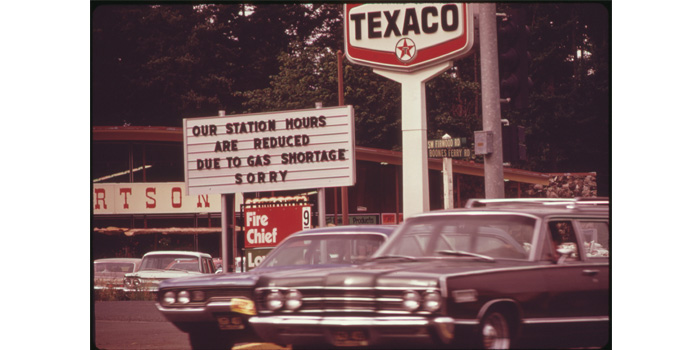 The significant increase in aluminum-bodied vehicles these days is driven in part by the same gasoline mileage issue we faced in 1973. The federal government has decreed that by the year 2025, the Corporate Average Fuel Economy (CAFÉ) is to be 54.5 miles per gallon for all car manufacturers.

The Organization of Petroleum Exporting Countries (OPEC) decided to punish the U.S. for their support of Israel, so, in 1973, they shut off the spigot and caused the first American gasoline shortage. It changed our industry like no other event ever.

At the time, gas was cheap and plentiful, and bigger was better. Like V8 engines? Was 396 cubic inches not big enough for you? Then how about 426 or 427 or 428 or even 502 cubic inches? Almost overnight, those giant motors went from being desirable to almost worthless.

The second casualty of the gas shortage was the full-framed automobile. A steel frame that felt like it was made from bridge girders was under almost every car on the road, and getting better gas mileage required lighter cars. In Europe, where gasoline was (and is) way more expensive, they built lighter cars with no perimeter frame. These three-sheetmetal box cars (called unicoupes) are safer in virtually every collision than a full-framed vehicle because the front and rear boxes collapse and absorb the force before it gets to the middle box with the passengers in it.

The third victim of the gas crisis was the gauge (thickness) of the sheetmetal used to stamp the panels. In another (and ongoing) effort to reduce vehicle weight, the engineers rearranged the molecules within the steel to provide the same tensile strength in a thinner panel. From 18 gauge mild steel to 22 gauge high strength steel to 24 gauge high strength-low alloy steel to 28 gauge Boron-infused steel, the metal used to make the car not only got lighter but stronger as well.

Like many in our industry who were around during the mid-1970s, I have a tale of passing up a great car because it had poor gas mileage. One of my customers had just sprayed a very nice complete lacquer repaint on a 1965 Corvette coupe. The car had a big block with two four-bbl carburetors and four-speed stick, and got about six miles per gallon. He couldn’t get anyone interested after the gas shortage and offered me the car for $2,500 to settle his bill. Woulda, shoulda, coulda but sadly didn’t. Why would I want something that only got six miles per gallon?

By the time the American car manufacturers re-designed and re-tooled their factories to build lighter weight unicoupe cars, it was 1979 before a vehicle with a small engine, no frame and thinner panels reached the market. The X-Body General Motors Citation hit our business with way more impact than the new aluminum (700 lbs. lighter!) F-150. Most shops then had never seen anything like it.

Because it didn’t have a perimeter frame, it was difficult to hold it in place while pulling out collision damage. Because the suspension was hung from the front sheetmetal box instead of mounted on the frame where it could be shimmed into alignment, there was no margin for an “almost right” repair. Because the steel was a complicated blend of metallurgy, you couldn’t heat it cherry red or you would destroy the tensile strength. Clearly, new equipment and repair procedures were required.

Up until that point, the most expensive thing in most body shops was the fireproof box inside of which they painted cars. I sold lots of crossdraft, no-air-replacement, galvanized, hip-roofed spraybooths for $5,000 to $10,000. The first heated crossdraft I sold was every penny of $15,000. The new equipment required to properly and quickly repair a unicoupe car was $25,000, and the trick stuff was $40,000. It changed our business forever. Even in those days of yesteryear, insurance companies dictated conditions to body shops, and a safe repair on their insured’s 1980 Citation required structural equipment that would measure, pull and hold the car.

Measure, pull and hold were the problem. You needed a false frame to anchor the car, to pull in several directions at once and possibly (most importantly) measure to the exact millimeter that the car was back to spec. Several ways to accomplish that goal were in play in the late 70s, early 80s.

Pinch weld clamps grabbed the car and were themselves fixed to either a perimeter frame, bolted to the floor anchors or mounted on a raised rack. Once the vehicle was rigid and steady, you could measure using either a dedicated fixture jig much like they used to build the car or a universal set of pipes and adaptors that let you build your own jig to printed specs. Or, you could use a laser beam system which would intersect targets mounted under the car. Using multiple hydraulic rams in some fashion, each vendor offered a method to make simultaneous pulls to the damage.

The Inter-Industry Conference on Auto Collision Repair (I-CAR) was created by the car manufacturers, the insurance companies and the collision business (the inter-industry part) for the specific purpose of teaching this entirely new way of repairing collision damage to every shop, everywhere. Today, I-CAR continues to lead the way in educating our industry in the safest, fastest way to repair Mrs. Smith’s car. Take some current classes soon!

The huge sea change I speak of was the necessity for the average shop owner to become both a better salesman and a better businessman. In the early 80s, way less than 10 percent of the cars on the road were unicoupes, and many shops dragged their feet before they spent more money on equipment than ever before to fix just a few of the cars on the street. The shops that saw the light, either from insurance company pressure or just good sense, spent the big money. They learned to be salesmen when they had to sell Mrs. Smith on their shop instead of the cheaper, no-equipment guy down the street. And they had to sell her because running cars across the bench was the only way they could make the monthly payment on that large metal pile of money they had bought.

Proper repair required an expensive new welder, too. Welding the special steel had to be done with a metal inert gas (MIG) welder, and while they were common in welding shops in 1979, they were rare birds in body shops as all of the shops either arc welded or fired up the oxyacetylene torch (or brazed it together with solder!) I sold a bunch of European wire welders to my customers because you couldn’t turn the welding shop versions down low enough to not blow through the thin, high strength steel panels. Just like today, using a shielding gas around the metal-to-metal electric arc keeps out the oxygen and makes the best and fastest welds possible. The shops who bought those early collision repair wire welders quickly discovered that even though they were required for the new metals, they were just as fast on old-style steel, too.

The significant increase in aluminum-bodied vehicles these days is driven in part by the same gasoline mileage issue we faced in 1973. The federal government has decreed that by the year 2025, the Corporate Average Fuel Economy (CAFÉ) is to be 54.5 miles per gallon for all car manufacturers. Because the method they use to measure that number is science lab-based, the actual gas mileage you’ll average in 2025 is closer to 36 mpg. But still, the increased use of lighter panel materials – either aluminum, glass, graphite or some newer, thinner steel concoctions – will require new methods and equipment to effect a speedy and safe repair.

Today’s successful collision repair shops will acquire the necessary equipment and adopt new procedures just like they always have. Driven either by the insurance companies’ requests or just forward-thinking owner-ship, they’ll train their techs, buy the right welders, self-piercing rivet guns and any other devices to accomplish the repair and return customers’ vehicles to the pre-accident condition that Mrs. Smith and her insurance company expect. Go get ’em!

Training and Education: How to Avoid a Fire at Your Auto Body Shop

Body Shops and Aluminum, How Did We Get Here?