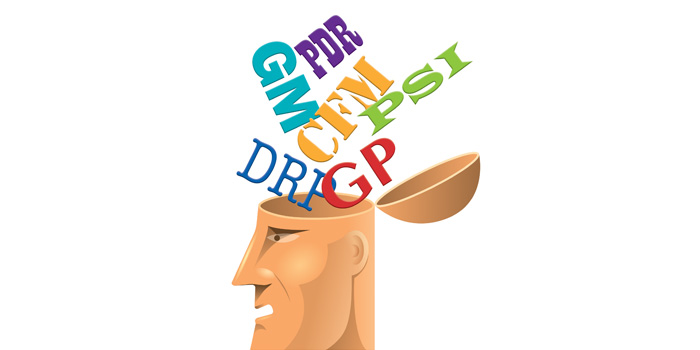 It takes years before you understand all the lingo and applicable terminology in our industry. There are so many letters! Which one is CFM, and which one is PSI? Is GP the same as GM? Does your DRP suggest PDR?

I believe our business is unique in many respects, and it takes years before you understand all the lingo and applicable terminology. There are so many letters! Which one is CFM, and which one is PSI? Is GP the same as GM? Does your DRP suggest PDR?

In describing air compressors, several numbers and acronyms are key. The volume of ambient air that any compressor pump sucks in, compresses and discharges is measured in cubic feet per minute (CFM). The compressed air the pump then deposits in the storage tank is measured in pounds per square inch (PSI). As more and more air is stuffed into the receiver, pressures increase to the limit the pump can push. Both numbers are important in any body shop.

The difference between the air volume the pump takes in at 14.7 PSI (atmospheric pressure) and discharges at 175 PSI is a measure of the unit’s efficiency. Typically, anything above 70 percent (70 percent of the intake volume was discharged at the set air pressure) is acceptable, and the closer to 90 percent efficiency, the better that unit’s design. Internal friction, operating temperatures and air velocity all play into a top-performing air compressor design. Price should seldom be the only buying criteria.

Whether pistons or rotary screws, they trap the incoming air in a chamber with a one-way valve and proceed to decrease the volume of the air by mechanically compressing it into a smaller and smaller space. All air tools consume cubic feet of air at a set volume. Adding up all the CFM consumption figures for all the spray guns and sanders in the shop is a necessary beginning for acquiring the right compressor. Free-wheeling air tools (like most grinders) consume much more air volume than tools which use the compressed air to drive a gear or two.

Many shops who were skating right on the edge of having just enough compressed air volume to keep everyone in the shop sanding and spraying on a busy day were pushed over the edge by adding a waterborne paint line. Because water is a one-speed solvent, it’s hard to accommodate changes in the weather by switching to the slower or faster evaporating stuff. Blowing air past the painted surface is a great way to speed up dry times, but the additional CFM required to fill all those air venturis or jet nozzles often requires another air compressor – certainly a clean, oil-free and water-free one.

There was a time when you could reliably say that for every one horsepower of the electric motor, the pump should deliver about four CFM of air to the tank. Both better and worse electric motor designs have made that relationship a less accurate benchmark. Inexpensive electric motors are often rated at peak horsepower; that is, the maximum crank just before it blew out. So a 5-hp cheap motor could deliver only 10 or 12 CFM, not 20. More efficient compressor pump designs can be driven by smaller, better built motors so each motor horsepower could produce six CFM on a particularly good platform. Standard advice applies: buy more air than you need now – more than you think you might need someday – and about 20 percent more than that should be about right.

My customers thought I was rich. “Mark, I just paid you $400 for a case of clear!” (It was long ago, folks!) So I just made $400, they thought. Sadly, I was unable to manufacture the clear or even the sandpaper I was selling them and had to buy my inventory from someone else. Called cost of goods sold (COGS,) it’s what you paid to buy or build whatever you’re selling. For my PBE jobber business, it was the price I paid to buy the inventory from the manufacturers. For a body shop, the COGS would include the parts, paint and material, sublet and labor they bought from others.

So, I explained to my customers, I don’t keep the $400. I spent $260 to buy and ship it to my store. That leaves me $140 bucks, right? Right! That money, what’s left from my selling price after I pay the direct costs to make or buy it, is my gross profit (GP).

Gross profit is often stated as a percentage of the selling price. In the example above, I sold it for $400, paid $260 to my vendors and had $140 left to pay my staff, rent my building, gas the trucks, etc. The $140 gross profit was 35 percent of the selling price ($140/$400 = .35). Once we start to talk in percentages, it might be easier to describe the same number as gross margin (GM). And sure enough, gross margin percentage and gross profit percentage are the same thing: the money left to run your business after you sold it and paid the other guy for it.

The first step to improving your own business is to understand where you are now on gross profit, but improvements are easier when you know what similar firms’ results look like. Industry benchmarks are easy enough to find; I have my opinion (no way!) and say our typical GP/GM benchmarks look like this:

The first Direct Repair Program (DRP) I saw was Allstate’s Priority Repair Option (PRO) around 1987. By meeting specified criteria, a body shop could become a partner vendor and begin work without an adjustor’s visit. Whether you think they’re the devil or the savior, they’re here to stay and likely to choose even fewer preferred partners in the future. When they say train more and equip better, you better pay attention.

The first paintless dent repair (PDR) I saw was the result of a killer hail storm around 1991. There was this secret process somewhere in Texas, the rumor mill said, that could magically take the dents out of hail-damaged vehicles. My local Mercury dealer had sent a white Sable down there on a transport and it was just back, without the dents. A shop owner friend and I crawled all over the car and could see the damage in the moldings and a few shadows on the hood and top but all hail damage was magically gone, and it wasn’t repainted. How could this be, we asked each other. Can’t be heat, can it? Maybe it’s cold, and they freeze and shrink the dents out. We stopped at the next auto parts store, bought a can of R-12 Freon (it was a long time ago) and rushed back to his shop to try it. We found a suitable hail dent in a nice, flat hood and pointed the Freon hose right at it. Other than punching an unnecessary hole in the earth’s atmosphere, nothing happened. It was that foolish move that prompted me to investigate how the dents were actually removed, discover the slowly-massage-the-metal PDR process and write the first article about it for BodyShop Business a long time ago.