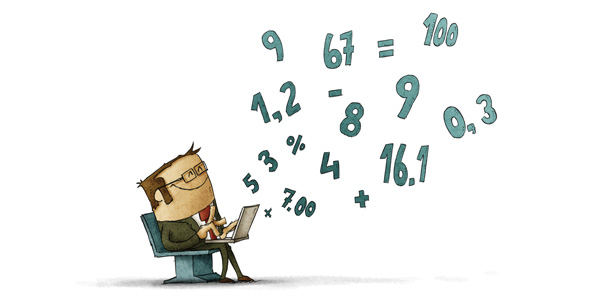 I started speaking about our industry for money in 1986. Over these many years, I’ve heard two frequent criticisms of my presentations from those who paid to hear them: I talk too fast and there’s too much math. Guilty on both counts.

All business runs on math. Gross margin percentages, health insurance contribution formulas, annual inventory turns and individual technician production efficiency are among the thousands of math equations possible that apply to our business.

I taught a series of three two-day classes that clearly pointed out the general aversion to business math. One class was about sales and marketing and was the most popular choice, and another was about operational best practices and was the second to fill up. The class that had “finance” in its title was by far the least popular, but I feel was the most useful.

If you don’t understand where the business (whatever it is – collision repair, jobber stores or furniture stores) earns and spends its money, you’ll have a hard time succeeding. As a result, all my classes, no matter the title, have some business math elements included. Once you know your own firm’s results, you can employ them as in-house benchmarks and strive to improve the same number next month. You can compare your result to similar published industry benchmarks to quickly identify any numbers far out of the normal range. But in all cases, you must be able to calculate your own business results first, hence my reputation as a speaker who does too much math.

During class, I talk about the exact formulas to find the numbers and some practical steps to improve them. By the way, I do speak very quickly and change topics frequently, in part because I have to hold your attention for two full days and need to seem interesting. But mostly because I’m trying to disguise the fact that this is a math class!

If you can’t measure it, you can’t manage it. That’s 47 years of experience in our industry and five years in business school summed up in nine words. Wishing you could sell more or hoping that costs will go down are unlikely to maintain a profitable business. Whatever the useful numbers you decide on for your own business, you need to collect them over a suitable time. I’m a fan of using 90-day chunks of time to compare most collision industry figures. Calculating business numbers each month is a great plan; just don’t make any hasty decisions based on one month’s results. Helping calculate my customers’ or my clients’ business numbers is always my first step in trying to better their outcomes. Investing their monies wisely in equipment, training or facility improvements is easier when you know your current business results and can predict the improvements that will accrue if you buy the whatever-it-is.

I found success in shop equipment sales whenever I could demonstrate that the shop’s money invested in some new device would be recovered and continue to make the shop profitable going forward.

I conjectured that selling anything just using the standard FAB method wasn’t going to be enough to close the sale on expensive shop purchases. FAB refers to the tried-and-true selling strategy called features, advantages and benefits. For example, this new spray gun is made from anodized unobtanium (feature) and weighs just half as much as the lightest competitive spray gun and will never rust (advantages). With this lighter, longer-lasting gun, the shop can paint more cars (benefit).

Instead of wishing or hoping they would be interested in what I was selling, I always set out to do a “pencil sell” showing the likely shop results once they owned the cool thing.

Here’s the pencil sell I used to put the first automatic spray gun washers in my customers’ paint rooms 30-some years ago. They were blue plastic tubs with yellow angle iron legs and a Graco air pump that made a noise like a John Deere Model B (putt, putt, putt) that no one had ever seen before.

First, I always tried to make the easy sale and, at the same time, establish the goal line.

“Hi, I have a new device that will wash your spray guns while you do something else; it is $595. May I sell you one?”

“No” and “buzz off” were the most common answers. I then asked for permission to show them, on paper right in front of them, how it would be a good investment. I said I would recover their $595 in three ways: less labor time, less solvent cost and less hazardous waste.

Labor time: At that long-ago time, the local door rate was $30 an hour. Leading siphon-feed spray gun manufacturers said that it took six to 10 minutes to clean a spray gun. I used six minutes (the more efficient edge of their cleaning time range) and figured 10 cleanings
a day.

But, I said, the painter won’t rush back to work just because you own the new gun washer, so figure half that time he still smokes a cigarette and shoots the breeze. The shop is still ahead $75 each week (half the projection) in labor.

Solvent cost: A 55-gallon of cleanup thinner was about $1 a quart in the big drum. I said it took a quart each time you cleaned the gun. No, no, the skeptics said, we don’t use that much. Pull up again and again on that leaky barrel pump until something comes out, splash it around, dump it out, repeat. I know they were using that much because I sold them a new 55-gallon of cheap thinner every month.

Ten times a day at $1, five days a week is $50 straight into the slop barrel. But…I wanted to sell them special gun-cleaning solvent (mid-temp lacquer thinner with a dose of MEK) that would still cost them $15 a week. So, save $50, spend $15, ahead by $35 each week on solvent cost.

Waste generation: Back then, it cost about $150 (those were the days) to legally haul away 55 gallons of waste paint and solvent. That was $36 each week, and the new gun cleaner would cut your waste generation at least in half, so save $18 every week with less shop waste. (By the way, it costs today’s shops $7,000 to $10,000 to fill a 55-gallon drum with waste. Then pay to haul it legally away!)

Summary: Save $75 in painter labor (conservative choice), plus save $35 in solvent (including buying new) and $18 in waste hauling (washer reduces waste
by half).

Here was my close: “What if half of what I just showed you on this piece of paper was BS? I made conservative choices in your favor each time, but instead of the $512 this device might save your shop, say it’s just $255 saved each month. At $595 for the unit, you’ll recover your investment in 2.3 months and continue to make money going forward. Now can I sell you one?” I sold a bunch of gun washers to a bunch of shops and they indeed saved labor time and solvent costs and reduced their waste disposal fees.

Don’t run from business math. Understanding how to calculate your own results and setting out to measure your improvements is the surest road to continued profitability. If you knew your labor costs, sales mix (parts, labor, P&M, sublet) and gross margin, you would be in a great position to do your own pencil sell on any new equipment, training or building investments.

Can’t make the math work on that particular device, addition or class? Then maybe that’s not the right choice for your shop. You’re free to buy “it” because it’s pretty or it’s the cool thing and everybody has one. Or you could ask the salesperson to show you how you’ll make back your investment and continue to prosper. Pencil out the math. Wishing and hoping are no substitute for measuring and managing.