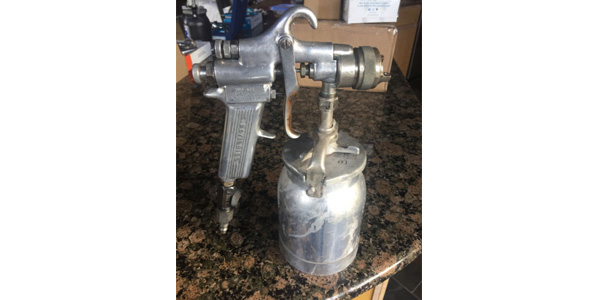 Three DeVilbiss spray guns tell a tale of how I learned to paint cars.

These three DeVilbiss spray guns tell a tale of how I learned to paint cars. I know you were thinking I must have also used them to paint those stick-figure buffalos on the sides of cave walls, but no, not quite that long ago.

My dad and I opened a PBE specialty store in 1970, and I set to work trying to understand our customers’ problems. We sold paint guns along with the paint, and I quickly learned to rebuild them; learning to actually use them wasn’t as easy.

In 1888, Dr. Allen DeVilbiss invented the atomizer using a rubber bulb, some tubing and the base of an oil can. His goal was to get the liquid medication to stay on his patients’ sore throats rather than immediately wash away. In 1907, his son Thomas DeVilbiss turned the idea into the first hand-held spray gun, initially using it to paint furniture.

My first spray gun was one of the company’s most popular versions, the Model MBC. It was constructed so that the entire spray-head assembly – complete with air cap, fluid tip, fluid needle and paint pickup – would dislodge from the gun body by loosening a single bolt – making it easy to change colors on an industrial production paint line. Simply disconnect the spray-head and fluid hose from the maroon paint, reconnect to the head assembly with black paint and never have the gun handle leave your hand.

I learned to paint acrylic lacquer at a paint manufacturer’s training center with a similar MBC. I learned that metallic colors could be made much lighter or darker by changing the speed of the solvent, the amount of the solvent and the atomization air pressure. Faster, more and higher PSI yielded a lighter-looking color; less, slower solvent and lower pressure made for darker-looking metallics. Lacquer is very easy to paint; since it’s going to be buffed to a gloss anyway, the painter’s technique, hand speed and gun distance don’t make as much difference. I also learned to blend away a mismatch using color letdown with clear and a breezy gun stroke.

Not every industrial paint line changed colors. All the tool boxes were red or all the tractors were green, so no need for the expensive machining to make a detachable spray-head on those paint guns. The Model JGA used the same fluid tips (.70”) and air caps (#30, #43) as the MBC, so the finished coating result was the same in a lighter gun and less expensive casting. The Model JGS was the same gun body but with a black plastic, quick-change retaining ring. I sold a bunch of them to painters who wanted to save labor time removing and installing the air cap.

I used my own version to paint my first acrylic enamel complete, a $300 MG-B roadster. It was not a nice car, but the price was right. Ten-year-old British cars weren’t the best investment back then, and this one had a hard life. The interior panels and carpet were long gone, and I used the leftover yellow/tan rubber-back shag carpet from our guestroom to replace it. I used the JGS for my first acrylic enamel complete paint job. Acrylic enamel was the new kid; sticky alkyd enamel was suddenly old-school.

I borrowed a sad cement-block and drywall spraybooth from a customer but could only use it at night when they weren’t there. Good lighting caused the left half of the car (with lights) to look OK for my first effort. Sadly, the right side (no lights and low painter skill) had enough curtains to decorate a mansion. I sanded it down over the next few evenings and did better on my second attempt. It was nice that you could re-coat an enamel failure in less than 30 days. This was pre-isocyanate hardeners, which made re-coatin’ enamels mostly bulletproof.

In 1987, the SCAQMD passed Rule 1151 and suddenly high-volume low-pressure spray guns were the hot deal. I had only heard of HVLP paint guns from the Kirby vacuum cleaner sales force who went door-to-door showing your grandmother how she could clean the carpet and paint the fence by reversing the airflow. The switch to gravity-feed spray guns (both my MBC and JGS had #450 Sharpe No-Drip siphon cups, on the bottom) was a hurdle for many painters, and in one clever solution to improve ease of use, the new-think DeVilbiss OMX was going to use cup liner bags.

I was doing some training with the DeVilbiss refinish folks back then and had heard of their new HVLP offering, coming soon. Cool stuff: adjustable fluid tip, ergonomically comfortable, extra lightweight, no spill and more. I could hardly wait. I had been talking it up with one of my painter customers and had gotten him fired up too. The morning the UPS truck brought my first pilot version of the new gun, I grabbed the box and rushed out the door to my eager customer’s shop.

He was set to paint the front clip on a brown metallic GM sedan. It was single-stage acrylic urethane enamel, back when the special reducers were potent enough to expose sand scratches on the car next to yours! Let’s vote: good idea to paint that brown metallic car with the unseen, brand-new HVLP gun, or bad idea? Right. I wish I had seen it that clearly back then. After I paid dearly to wipe down and repaint that car, along with calling their customer to say it was my fault they couldn’t leave for vacation in it, I never tried a new anything on a ready-to-deliver customer’s customer’s car.

Today’s refinish spray guns are light years better than my three antiques, but the necessary skill set is unchanged. Gun distance, hand speed, overlap, air pressure, lead and lag, and accurate gun adjustments are the best part of any refinish success. It’s not the equipment, it’s the operator.