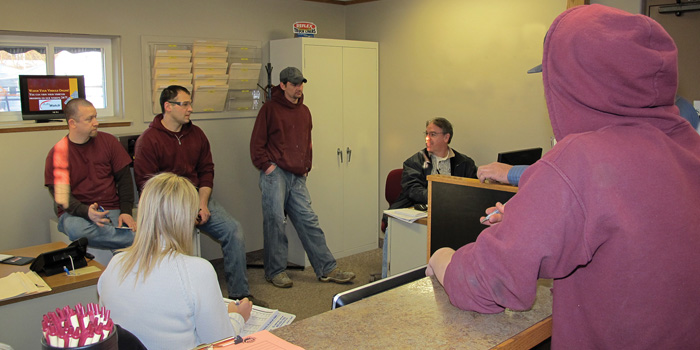 One sure way to improve both morale and work flow is to talk about what you need to improve your operations. Start a similar conversation in your shop at the next coffee break. You might be surprised what you can learn.

In recent conversations with sundry body shop folks, I asked what type of repair they would wish for if I could magically deliver exactly that vehicle with that damage on it tomorrow. Both techs and shop owners frequently wished for a late-model car or pickup with lots of bolt-on parts: new hood, fender, headlight and grill. In and out in three days. Enough parts to make some good money, and enough labor to beat the flat rate handily. Here in the Midwest, that repair is often a deer hit. In Texas, it’s rain at 5 p.m., and in major metros, it’s road construction anytime.

Airbags were a frequent topic of discussion. One shop had a deer hit that had totaled because four airbags had been set off. Hard for a shop to make any money on a job they don’t fix, and the profusion of passive restraints in newer cars along with re-setting the tensioners and various sensors may drive up the repair cost past the point the insurer is willing to pay. Unless the car was near new, most wished for work with fewer replacement airbags on the sheet.

Several wished for a repair on a recreational vehicle – because all the panels are flat! Jobs with no corners were easier. In those shops that did semi-truck and RV work along with insurance-pay collision, several chose the big rigs as the hours were good and refinish times were less rigid.

I also asked which insurer they wanted on their ideal job, and State Farm was mentioned many times. Others were regional, based I think on the attitude of the local adjusters. Many carriers were a preferred payer if the shop had their desired OE endorsements, pointing out the increasing desire of all insurers to assign work to shops that have proof of training.

There was little universal agreement on who made our imaginary damaged vehicle. Ford, Honda and Toyota got many votes in the independent shops and, of course, the dealer techs preferred their house brands as they were comfortable working on them.

In my classes, I pose the question, “Who’s more productive, independent body shops or dealer shops?” I add that they’re identically equipped with the same number of techs in the same square footage. I always get lots of guesses. Is it newer cars at the dealer? More opportunities at the independent? Is it because owners often write the estimates at the independent? Is it the handy parts department 50 feet away in the dealer? On the whole, dealer shops are more productive because they’re working on the same cars every day. If you were the tech and fixed five Honda Accords, you’d be pretty good at it by the fifth one. The independent tech also fixed five cars, but they were five different brands and models.

All shops I chatted with had repaired a new aluminum F-150 with no problems. Some techs were grateful their shop had purchased all the new equipment. Others couldn’t understand the hubbub as they had been repairing aluminum panels for 20 years. Some owners were determined to only accept assignments from carriers who would pay a higher door rate to help offset their large investments in dedicated aluminum tools and spaces. While all shops in my survey had indeed been paid a higher labor rate for aluminum F-150s, most had been told no dice on any other aluminum panel repairs.

In the Paint Shop

Several painters wished for a steady stream of single-stage black vehicles. They would paint everything they could off the car and never worry about a match. Clearcoated black solids or metallic blacks weren’t as popular.

I recall the day decades ago when I saw my first black variant deck. Up to that point, black was black no matter the vehicle or the paint manufacturer. Black is no longer just black because the paint companies had to add additional pigments to prevent what’s called pigment migration.

Back in the day, I had a couple customers who cleared their carefully painted black lacquer cars only to see the primer show through when they were done. It takes less black pigment to create a colored coating than any other color pigment, and when the black was re-wet with the clearcoat, the pigments would shift left and right, sometimes exposing the undercoat. By adding other dark pigments to their blacks, the paint companies could insure they could be cleared and there would be enough pigment to prevent any show-through.

White diamond and white pearl repairs got the most “no thanks” votes. Because no shop’s equipment matches the vehicle manufacturer’s, painters must spray let-down test panels.

In addition, it’s not just getting the number of coats correct. It also depends on the shade of the undercoat so that sometimes the painter has to create several multi-layer test panels over two or three shaded undercoats – lots of extra work that may not be paid by the insurer. In the shops that did get some extra refinish time, they had to photo document the mismatch, slowing everyone down even more. Love that single-stage black!

When we were done wishing for the perfect, profitable job, I asked what new equipment I could provide them. Overhead hose reels were mentioned by several techs who had previously worked in shops with them. A pin-less resistance welder made the Christmas list with several folks. A better scan tool was popular in independents, and techs who were now in dealerships were grateful for the correct scan tools their automaker provided. Tracing error codes was another “no thanks” job with almost everyone.

A couple of painters currently had medium wave infrared curing lights but wanted the high-dollar (and faster) shortwave ones. Estimators wanted a quick measuring tool for use in the estimate bay, not on the frame rack.

There were mixed reactions to a vehicle lift. Estimators wanted a drive-on unit to get the vehicle up and make it easier to see undercarriage damage. Some techs wished for a lift in their stall, and some who had previously used them thought they got in the way when pulling and were sometimes time-consuming to load. Back when I sold body shop lifts, I felt we could document a 20 percent increase in production for a stall with a lift. Efficiency increases dramatically when the work is at a comfortable height and easy to see.

One sure way to improve both morale and work flow is to talk about what you need to improve your operations. Start a similar conversation in your shop at the next coffee break. You might be surprised what you can learn.