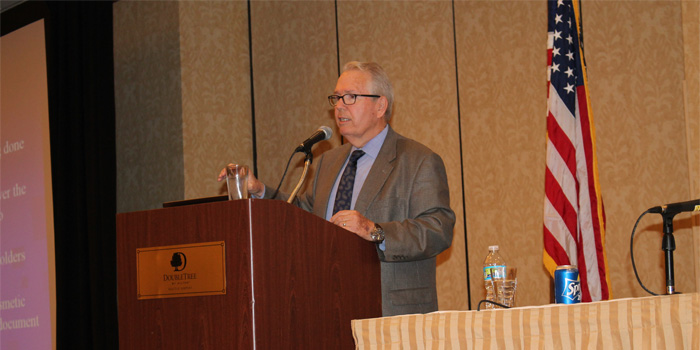 The decision was made to eliminate a “cosmetic collision” category in the definition but not altogether kill the document, which many repairers at the meeting had been in favor of.

A debate over a document that defines the “minimum recommended requirements for a Class A collision repair facility” continued at the Collision Industry Conference (CIC) held in Seattle on April 20th. In the end, a decision was made to eliminate a “cosmetic collision” category in the definition but not altogether kill the document, which many repairers at the meeting had been in favor of.

Bill Wicklund, one of the founders of the Society of Collision Repair Specialists (SCRS) who was present at the Seattle conference, provided some perspective on why the document was created by CIC 20 years ago.

“The document was created because insurers were surveying anybody who claimed to be a body shop,” Wicklund said. “We thought that was unfair.”

The document was last updated in 2013, so the CIC Definitions Committee was tasked with reviewing it and making any necessary changes. However, some repairers at CIC voiced their opinion that the document should be altogether eliminated, saying it was more harmful than helpful and would be out of date quickly again given the rapid changes going on with vehicle technology.

Ron Guilliams, chairman of the Definitions Committee, admitted that the committee could have done a better job of reaching out to other parties for feedback.

“This committee seemed to have operated in a vacuum, and CIC’s purpose was to have discussions and talk about things in the open,” said Guilliams. “The people we reached out to encouraged us to have more open debate about this and let people weigh in and carry the conversation further.”

One of the most hotly debated items was part of the document that covered “cosmetic collision repair.”

“Having a ‘cosmetic’ category could be used against repairers, is what they said,” said Guilliams, referring to the opinions that were voiced between last January’s meeting and the April 20th meeting. “They expressed great opposition to segmentation, but more specifically were opposed to segmentation of cosmetic repair.”

Wicklund remarked that to him, cosmetic repair refers to guys who do spot repair or paintless dent repair in parking lots.

“We don’t want guys like that involved in what’s coming in the future,” he said.

Despite calls for the Class A definition to be killed completely, it was decided to keep it alive and carry on the conversation in the next meeting in Anaheim at NACE | CARS. CIC Chairman Randy Stabler argued to keep the document alive for a variety of reasons, including that it’s currently being used by insurance companies and state insurance departments.

One of the few people opposed to eliminating the Class A definition but in favor of revising it was Fix Auto CEO Erick Bickett.

“What a shame that we’re afraid to represent the industry and come up with something that has value,” he said. “We have a work product that has provided value over the years. My belief is when there is a void, the void will be filled. This is an opportunity to fill the void. To not revise it leaves the old public document out in the public domain.”

Aaron Schulenburg, executive director of SCRS, said the tiers and designations in the definition caused the most heartburn for repairers.

“These are things that could be used contrary to how they’re intended to disadvantage those working the hardest toward making this industry the greatest,” he said. “Perhaps the next step is to make this document not exist. Perhaps creating a minimum consideration for what a collision business is is more appropriate. That would help elevate the floor instead of compete with the ceiling. A lot of our members see us at national events, and for many who don’t attend, they equate the two and say, ‘What are you guys doing? You’re killing us!’ The consensus of [the SCRS] membership was they didn’t feel CIC was the place for this to happen.

“You don’t need a Class A document to do proper repairs, equip a shop and do the right thing in putting consumers back in safely repaired vehicles – you can simply do them. While this document may define shortcomings, it won’t change those who are short.”

Brett Bailey, owner of A&B CARSTAR in Kansas City, Mo., also voted to get rid of the document.

“Why would we not listen to the person who designs and engineers and builds the car, and use those tools to repair?” said Bailey. “Adding a document just muddies the water rather than allowing the OEs to tell us how to do it properly.”

Paul Sgro, owner of Lee’s Garage in West Long Branch, New Jersey, added, “Forty-six years ago, we sent a man to the moon. Today, if we could send a man to the moon, would we use the same technology? No. It would be unsafe and inadequate. Cars today have more computers and data is processed more than in a rocket, yet we want to use a document that doesn’t adequately define what we do? We have VeriFacts, the OEs, etc. By continuing on this path, we will be misleading the consumer, and they could have injury or death. I will rely on third parties or OEs to classify these shops, so there is no way to support this. We should end it before it gets any worse.”

Bickett defended the document again, saying, “Why wouldn’t a well-crafted document help an OE decided who is qualified for certification?”

Stabler, another supporter of the document, questioned whether people had actually read the document based on some of the comments he was hearing.

“Anything that elevates the industry and our standards is something I can support,” said Stabler. “Any document will be imperfect, but as I listen to the dialogue, I don’t think everyone has read the document. Anything having to do with equipment or training requirements are to OE specs for year, make and model.

“We all agree we need to elevate the standard. I think this document raises the bar. If we don’t have a document like this, insurers will continue to refer customers to shops that don’t have rivet guns, compression welders, etc. So as long as we can get closer, I support this.”

Advertisement
In this article:cic, SCRS