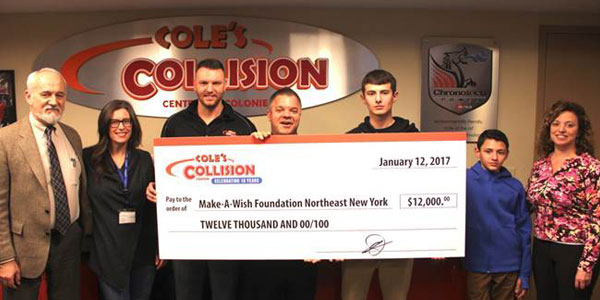 Representatives from Make-A-Wish Northeast New York and Cole’s Collision Centers with Tyler and his family.

Cole’s Collision Centers, the Capital Region of New York’s largest and fastest-growing family-owned auto repair company, is celebrating 10 years in the area. Since opening its first repair shop at 1904 Central Ave. in Colonie in January 2007, Cole’s has grown to four locations with a fifth location announced last month in North Greenbush, the company’s first in Rensselaer County. Opening is slated for later this year.

Cole’s has experienced more than 200 percent growth since opening locations in Ballston Spa and Wilton in 2010 and Clifton Park in 2012. To accommodate this and future growth, Cole’s moved its Colonie location to an expanded 18,000-square-foot facility in September 2015 at 1517 Central Ave. in Colonie. Cole’s Collision Centers employs approximately 100 people across its five locations.

“When we first opened, we had three employees and a mindset that we could offer this area a better quality of auto body work and customer service,” said John Cole, owner, Cole’s Collision Center. “This started out as a dream, and now it’s an unbelievable blessing for us to be where we are. I just want to thank all of our customers, partners and vendors who stood behind us for this many years to help get us here.” 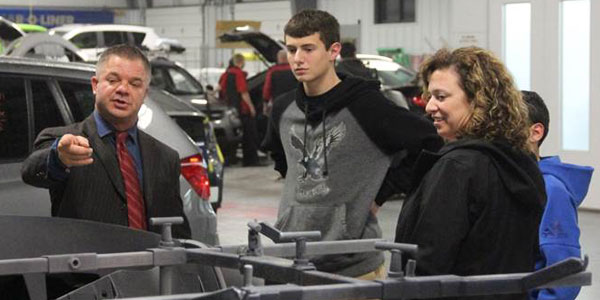 John Cole gives a tour of the shop to Tyler and his family prior to the check presentation.

Cole’s Collision Centers marked the celebration by donating $12,000 to Make-A-Wish Northeast New York. The donation will fund the wish of Tyler, a 15-year-old from Greenwich, N.Y., battling cystic fibrosis. Tyler is a Nike athletic shoe aficionado, and will be heading to the company’s headquarters in Oregon to meet famed shoe designer Tinker Hatfield and see firsthand how the famous shoes are designed and manufactured.

This is the third time that Cole’s has funded a wish with the local Make-A-Wish chapter. Past wishes have been a trip to Disney World and the restoration of a 1983 Mustang. Other organizations Cole’s has been a proud supporter of include the Center for Disability Services, American Red Cross Eastern New York, Ronald McDonald House Charities of the Capital Region and Saratoga Bridges.