The key to getting “at the table” versus “on the table” when it comes to legislation is establishing an effective government relations and lobbying initiative. 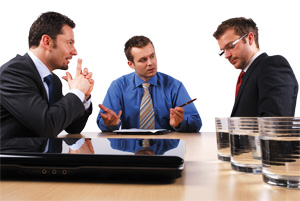 “You’re either at the table or you’re on the table.”

I recently heard this quote and realized that it does a great job of summing up the consequences of not getting involved in your local, state and federal government. It’s a slight variation on the more commonly heard bit of advice that it’s important to have a seat at the table when decisions are being made that affect your business. In no industry is this more true than collision repair.

Due to the involvement (like it or not) of the insurance industry and the fact that collision repairers are providing a service that can be harmful to the general public if not performed properly, the business of collision repair, next to the health services industry, is one of the most highly legislated and regulated businesses in the U.S. Yet time and again I meet well-educated and successful shop owners and managers who purposely distance themselves from government and politics. Surprisingly, some associations also feel this way.

Their reasons for staying out of the legislative game are varied. Some feel that their issues and concerns aren’t properly heard and so their effort is a waste of time and money. Others feel that the insurance industry is too powerful to fight. A few fall back on the common feeling that all politicians are corrupt. These reasons are all somewhat understandable…but they’re wrong.

A single decision by a legislative or regulatory body in your state or at the national level can cost you tens or hundreds of thousands of dollars depending on the size of your store or stores. Why anyone would distance themselves from an activity that could affect them
so profoundly is inexplicable – unless perhaps it’s because they’re simply intimidated by a process they don’t understand.

Let’s look at some steps you can take to establish an effective government relations and lobbying initiative no matter what state you’re in.

Before you expend any resources on any initiative, you must gain the support of your membership or company and establish clear goals and objectives. That starts with conducting formal and informal polls to identify the most serious threats and concerns to the collision repair industry.

This list of concerns should then be separated into two categories: what you just don’t like, and what is truly unfair to your membership or your business and is causing real harm. You should then eliminate any item on your list that’s already illegal and simply not enforced. Then, separate those items that need to be changed through legislative action and or could be changed through altering regulations, and those items that don’t require legislative intervention.

Once you decide what changes require legislative action, determine what items are realistic and which would be difficult to achieve. Most businesses and auto body associations have limited resources and therefore must prioritize the issues they’ll address. Once the vetting process is done, you can return to your association membership or business owner or manager for approval.

Once your goals and objectives are approved, develop an action plan that clearly lays out all parties’ responsibilities and timelines for completing tasks. For instance, the Massachusetts Auto Body Association (MABA), to which I provided consulting services, had legal counsel, a lobbyist and public relations professionals on staff or retainer, not to mention a central office staff. All had to be briefed on the plan and have their roles coordinated.

Other entities in your state that may have an interest in your legislative initiative are tow companies, dealerships (especially those that have body shops or sell parts), consumer organizations, vendors, appraisers, and most importantly, insurance companies. Don’t laugh – I once got over 20 insurers to support a regulation change on aftermarket parts proposed by MABA. Why? Because it was beneficial to them as well.

It’s critically important that you identify the key legislative and regulatory players in your state, such as the governor, insurance commissioner, legislative leadership, and the chairmen and vice-chairmen of specific committees.

You should also identify individuals who already have pre-established relationships with these decision-makers, such as owners of large businesses. However, you may know of friends, family members or shop owners who have repaired their local senator, representative or assemblyman’s car. These individuals can sometimes be more influential than a paid lobbyist.

Work Outside the Building

As stated earlier, not every problem requires a legislative solution. It’s important to recognize what, if anything, you may be able to accomplish working directly with stakeholders. Even if these unilateral discussions aren’t successful, you’ll still earn the respect of legislative leaders for trying to address the problem yourself first before seeking their assistance. This is because they’re busy and none of them like to be put in the role of referee. You’ll have shown that you’re trying to solve the problem in a professional manner and not just trying to dump it in their lap.

No matter how small something may seem, it’s a good idea to constantly keep stakeholders and decision-makers in the know. This not only shows a willingness to work openly and honestly with them but also allows for several sets of eyes to track your progress and make sure you’re following the plan and its stated goals and objectives.

Legislators don’t appreciate being made aware of information after the fact. This is even more critical when it involves the media. Any time a reporter asks a legislator a question on an issue they’re working on but haven’t been briefed on can have catastrophic consequences. Not only could their response jeopardize your initiative, but your relationship with them could also be damaged for placing them in such a position.

Whether attending a fundraiser, arranging a specific meeting or going to a legislator’s district office, it’s imperative that you and your supporters do everything possible to become known, on both a personal and professional basis, to key decision-makers. The business of legislation, like any other business, relies heavily on personal interaction, and success or failure may hinge on this. Never miss an opportunity to solidify that relationship.

After you’ve identified the key stakeholders and decision-makers, as well as exhausted your attempts at resolving as many of your issues on your own, it’s time to get all the key players together. Whether this is done by you, others or the legislators isn’t important. What is important is that once you’ve reached the point where you can clearly identify unresolved issues to your legislators, you don’t do it alone.

One time, the legislative chairman of the joint committee on insurance, after being constantly apprised of all our efforts and seeing us every time he turned around, invited us to participate in an auto body working group. The fact that the chairman formed the group ensured that those with the power to make changes would hear our issues.

Once the group was formed, we then had the forum we needed to promote our goals and objectives. No longer were we just talking about the issues or hoping insurers or customers would listen to our concerns. Now, we had all the players in the room, a seat at the table, and an opportunity to present our concerns, goals and objectives to the key decision-makers.

It was startling to see how readily certain insurers agreed, in the presence of these state legislators, that the issues we had been raising for years – steering, labor rates, supplements – needed to be resolved.

Ball’s In Their Court

After three months of meetings, each participant was allowed to propose their best comprehensive legislative solution for each of the issues we discussed. The legislators agreed to look at each proposal in the context of our discussion, but also stated that they would reserve the right to use all, some or none of each proposal to draft what they felt was the most appropriate legislative solution.

The chairman of the Insurance Committee then filed a comprehensive bill that included changes to laws on steering, shop equipment requirements, third-party administration of claims and more – all of which was favorable to repairers. Some sections were implemented through regulation, others weren’t adopted and others were unilaterally put in place by changes made by insurance companies. We didn’t get everything we wanted, but you rarely do.

Getting key legislative leaders personally involved in implementing a strategy is critical to success.  Legislators don’t spend time and effort on matters they won’t or can’t address. After months of meetings and years of involvement, the legislators’ own credibility is on the line. What they do is always uncertain, but rest assured something will happen.

While there are many people who don’t like the legislative process, it’s an integral part of a successful business or association. Ignoring it will put your business at risk. For proof, look no further than the recent implemented EPA NESHAP rules. It’s estimated that 25 to 35 percent of repair shops in certain states were not in compliance by the deadline this year. The fine can be as high as $20,000 a day!

Stephen Regan is the principal of Regan Strategies and has been providing consulting services to the collision repair industry since 1999. He’s the former executive director of the Massachusetts Auto Body Association, currently serves on the SCRS Board of Directors, and is chairman of the Governmental Committee for the Collision Industry Conference. He can be reached at [email protected].